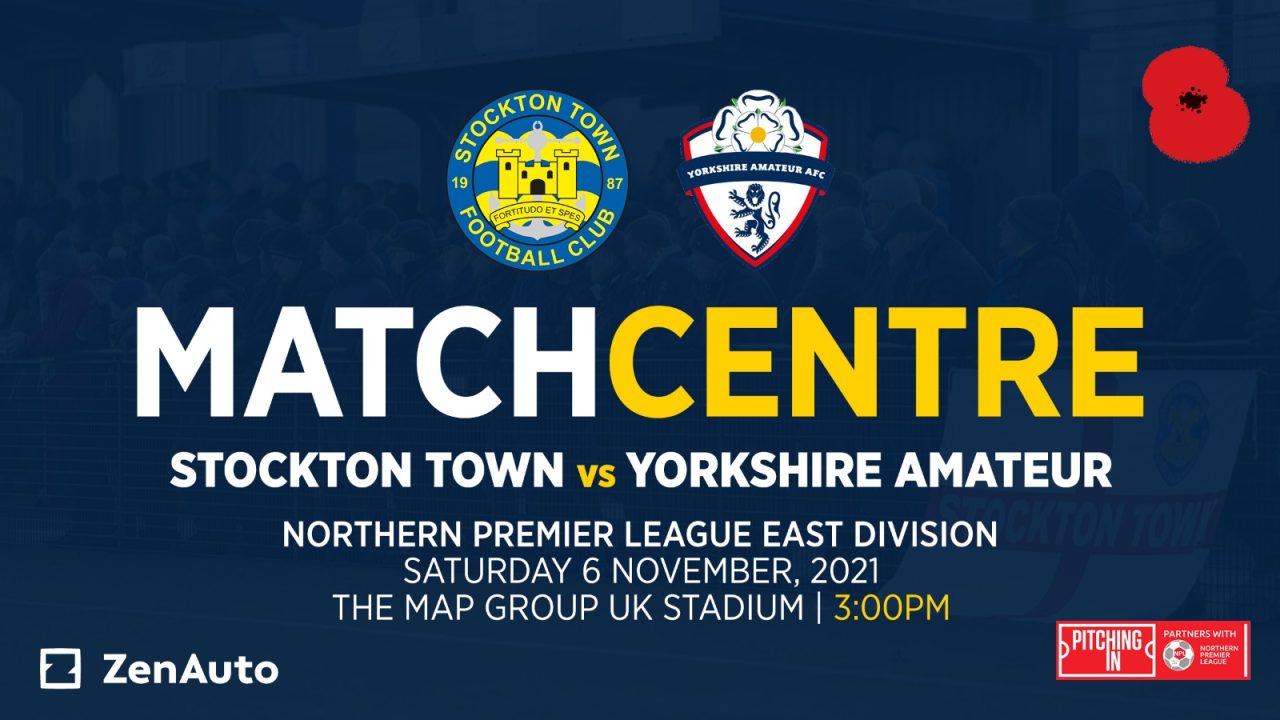 Stockton Town welcome Yorkshire Amateur to The MAP Group UK Stadium on Saturday, with the Anchors hosting a Remembrance Day Ceremony before kick-off.

The ceremony will involve both teams, representatives of the Royal British Legion and members of the club’s Under-11 side.

The club are also inviting active and retired members of the armed forces to the game, for free, to make this a day to remember and honour those who we have lost along the way.

Last time out, Michael Dunwell’s side returned to winning ways with a 5-0 thrashing of Lincoln United at Ashby Avenue, with Alfie Conway scoring his first senior goal for the club.

Nathan Steel, Mikey Roberts, Nathan Mulligan and Tom Portas all scored in the second-half as Stockton Town moved up to 8th in the Northern Premier League East Division.

A few milestones to watch out for this afternoon; should Jamie Owens score twice, the striker will have notched up 100 goals in the yellow and blue of Stockton.

This is the first ever meeting between Stockton Town and Yorkshire Amateur.

Yorkshire Amateur sit 12th in the Northern Premier League after 12 games, with 14 points from their opening dozen games.

The Ammers opened their campaign with two wins and two clean sheets against Worksop Town and Bridlington Town respectively.

Marske United ended their perfect start with a 4-0 thrashing at Mount Pleasant, before Yorkshire bounced back with a dominating 7-0 victory over Lincoln United.

Since that victory, Neil Gibson and Craig Ogilvie’s side have struggled for consistency in the division, with a 2-1 success against Sheffield FC their only victory in the league since August.

The Ammers were eliminated from the Buildbase FA Trophy last week, falling to a 4-1 defeat to Stalybridge Celtic at Bower Fold.

The key men to watch out for include former York City wing-back Charlie Jebson-King and joint top-scorers Roy Fogarty and Adam Priestly, with four goals apiece.

Speaking to Anchors TV after Stockton’s 5-0 win at Lincoln United, Assistant Manager JD Briggs said his side are prepared for a “different test” against Yorkshire Amateur.

“We’ve had them watched” he said. “They’re going to be totally different from what we’ve experienced.

“They’re a good footballing side, they like to keep the ball down and play football right through the team.

“It will suit them on our pitch so it’s a different challenge but that’s the beauty of this league; playing teams we’ve never played against and new challenges every week.

“We welcome that, we’ll regroup from the weekend on Monday, see how the guys are and prepare for Yorkshire Amateur.”