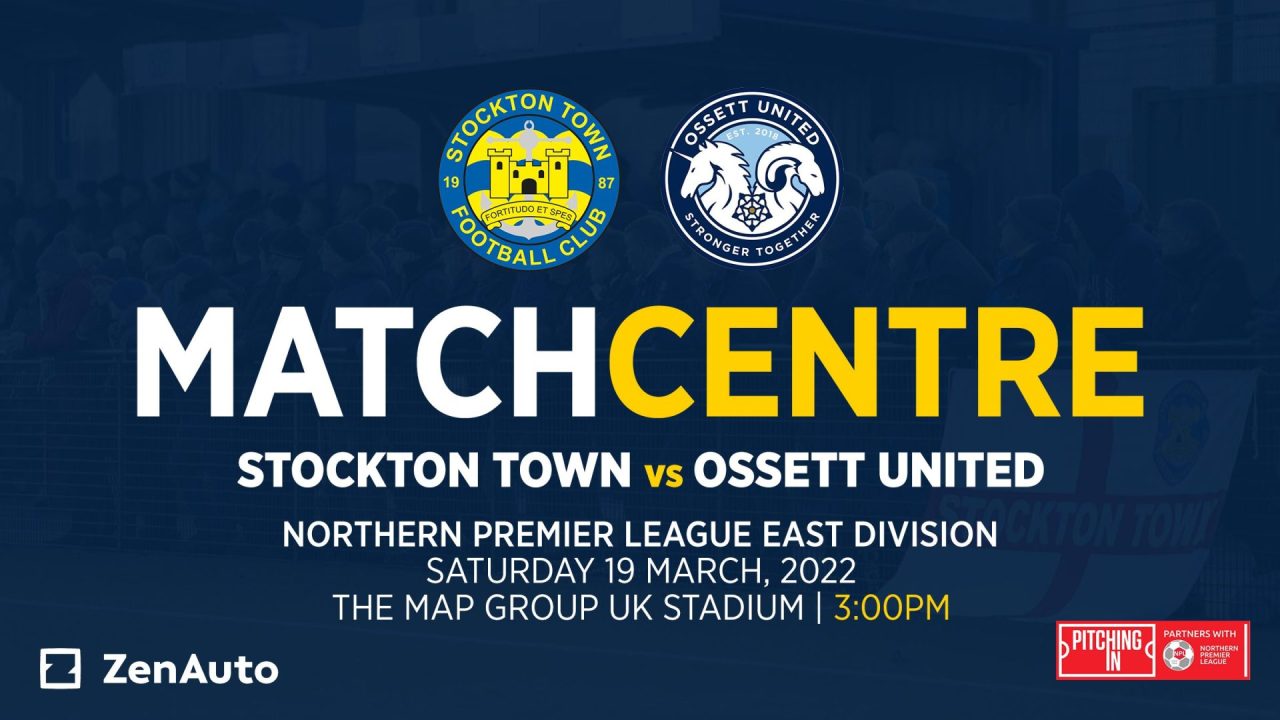 The Anchors are without a win since early February, but have picked up two solid points in their previous two fixtures with a pair of goalless draws against title-challengers Liversedge and Cleethorpes Town.

It was the second time Stockton Town have had back-to-back goalless draws in their history – the previous time was in 2011 when the club was still in the Wearside League.

Neither game produced major chances in the game, but a solid defensive performance was welcomed following a 3-3 draw with Sheffield FC where the visitors netted a late equaliser.

Stockton will once again be hoping to host a large crowd. In their last home game against Liversedge they welcomed 755 through the gate – the second highest attendance of the season so far.

There has been two meetings between the two sides; the FA Cup meeting at The MAP Group UK Stadium and the reverse league fixture at Ingfield:

Since those early season meetings, Ossett United have made a management change with Jas Colliver and Mark Ward coming in to replace the departed Wayne Benn at the end of December.

They made a solid start to job with wins over Tadcaster Albion and Brighouse Town, and followed that with a 1-1 draw with Dunston. They were then handed two crushing defeats of 7-1 and 6-0 by Cleethorpes Town and Liversedge respectively.

This past week they picked up back-to-back wins for the first time since the start of their reign with home triumphs over Frickley Athletic and Lincoln United. In the latter, they came from behind through goals from Aaron Haswell and Ifeanyi Ofoegbu to win 2-1.

Ofoegbu has proven to be hit since arriving from Worksop Town in December. The Nigerian has netted four goals included one on his debut and two in his previous two games.

James Walshaw, who netted the stoppage time winner in September, is another threat to watch out for. He scored a late brace in a 4-2 win over Frickley Athletic last Saturday.

Speaking Ossett United TV following the 2-1 win over Lincoln United, Manager Jas Colliver said: “It will be a real tough test. We know when you go up north it is a tough test, but one thing we are all looking forward to is a good surface.

“We know that we can continue from here (tonight), into Saturday and the Staveley fixture, where we had a good surface there where we can get it down and play.”

“We beat them in the FA Cup when we were good. They were very good when they beat us in the league, however we didn’t really turn up that day.

“They are another team that beat us the first time round we will be looking to turn that around, and get us three points. Obviously we have not won in the last three but also we haven’t lost either so they are good points we have taken in the last two games.”