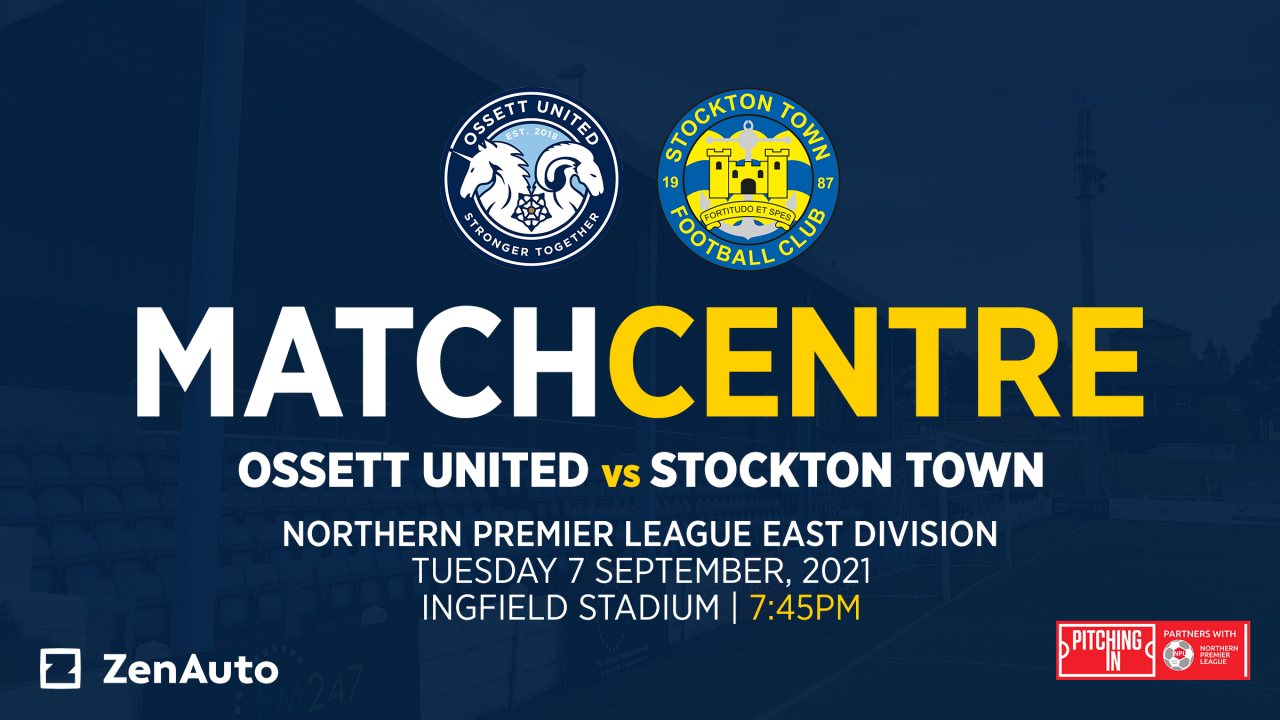 Stockton Town return to action on Tuesday night when they travel to Ingfield to take on Ossett United in the Northern Premier League Division One East.

The Anchors returned to winning ways on Saturday after two games without a win in the NPL, a 4-2 victory at Sunderland RCA which set-up a mouth watering Second Qualifying Round tie at National League North Curzon Ashton.

It was the first time since April 2013, eight-and-a-half years and 396 games ago, that Stockton had gone two competitive games without scoring a goal, but Michael Dunwell’s side returned to form by scoring four times away from home for the first time since the 5-0 win at Whickham in October 2020.

Earlier this campaign, Jamie Owens scored the only goal as the Anchors defeated Ossett in the FA Cup Preliminary Round at The MAP Group UK Stadium in front of a record FA Cup crowd of 476.

In their last league outing, ten-man Stockton Town played out a 0-0 draw with Shildon at Dean Street, ending their opponents perfect start to the season.

There has been one meeting between the two sides; the FA Cup meeting at The MAP Group UK Stadium earlier this season.

Ossett United have begun the season with three wins and a draw from their first five league games.

The Sheepicorns began the season with a 2-0 win away at local rivals Pontefract Collieries, Aaron Haswell and George Green scoring in each half for the visitors.

Ossett followed up their opening day win by defeating Stocksbridge Park Steels at Ingfield through goals from Nash Connolly and James Walshaw (2).

Following Ossett’s defeat at Stockton in the FA Cup, the Ingfield outfit bounced back with a third straight league win at home to Hebburn Town, Connolly with the double for the home side, but fell to the first league defeat of the season at Brighouse Town on Bank Holiday Monday.

In their last game, Wayne Benn’s side played out a thriller at Lincoln United, going ahead 1-0 and 2-1 before trailing 3-2 and eventually drawing level at 3-3 with 10 minutes remaining.

Talented winger Nash Connolly has started the season in some style for Ossett, scoring three times and providing three assist in six games.

Stockton Town returned to winning ways with a 4-2 victory at Sunderland RCA in the Emirates FA Cup, after the game, manager Michael Dunwell previewed the upcoming game against Ossett United.

He said: “It will be a difficult place to go on Tuesday night. We’ll have Lewis [King] and Shane [Henry] back for the game, which will improve the quality of the squad.

“We’ve had a good start to the league campaign, off the back of the victory at RCA we will go with confidence, looking to get a result.

“Ossett have had a good start as well, it will be a tough game. Any game in this league is tough, we haven’t had an easy game yet, but we’ve given a good account of ourselves in each one.”