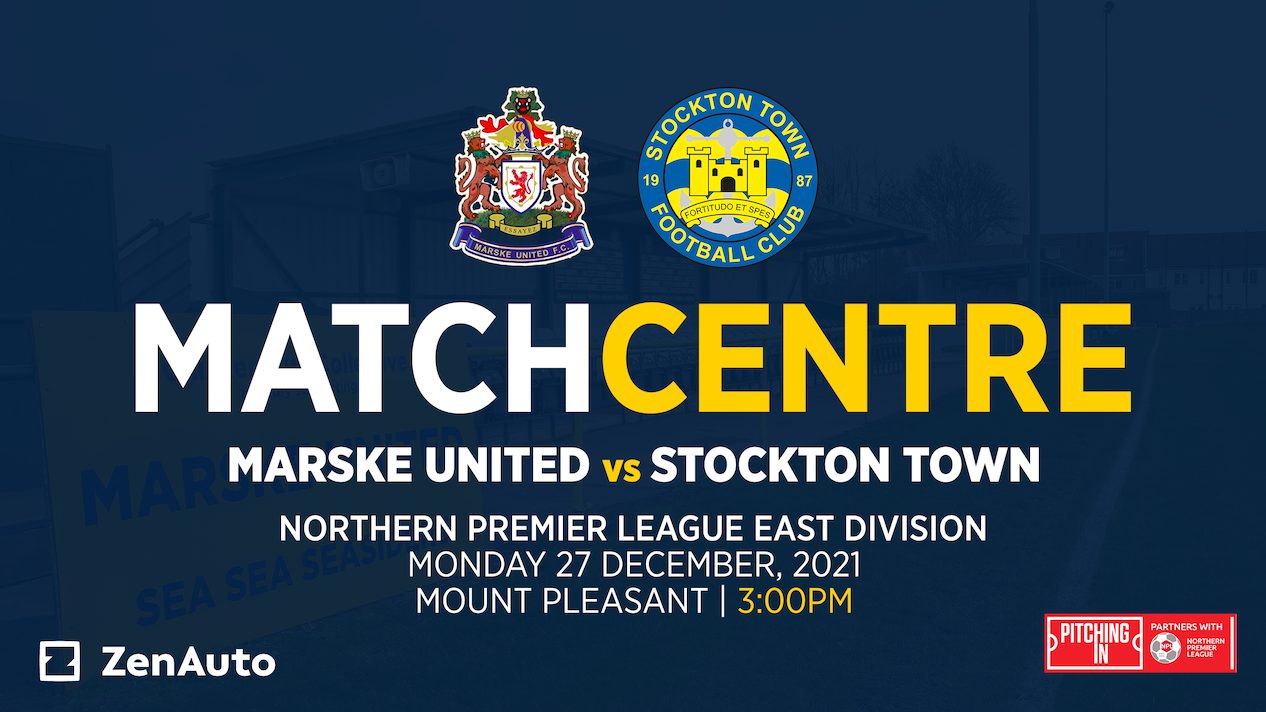 Stockton Town make the short hop down the River Tees to take on local rivals Marske United in the first competitive meeting between the two sides since May 2018.

Last time out, the Anchors edged Stocksbridge Park Steels in a five goal thriller to earn a fifth straight victory in a row in all competitions and consolidate fifth position in the Northern Premier League East Division table.

Kev Hayes added to his ever growing list of wonder strikes with a sumptuous curled finish midway through the first half before Steels hit back with two goal of the season contenders of their own from Nathaniel Crofts and Joshua Nodder.

Stockton battled back as Nathan Mulligan played his part in the turnaround, first his delivery forced Lee Cooksey to convert into his own net before his free-kick was directed into the path of Tom Coulthard who turned home the winning goal.

Monday’s meeting represents the first time the two sides have faced each other in competition in three and a half years, with Marske narrowly defeating Stockton in the Northern League, just weeks after the Anchors booked their trip to Wembley with a 3-2 aggregate victory over the Seasiders in the FA Vase Semi-Final.

Marske United and Stockton Town have met just four times in a competitive match before today, all in the 2017/18 season. The Seasiders completed a league double over the Anchors, but Stockton overcame Marske with a 3-2 aggregate victory in the Buildbase FA Vase Semi-Final.

Marske United are one of the division’s heavy pace setters with an almost perfect record after 17 league games. The Seasiders have taken all three points in 15 matches, with just one draw and one loss in those 17 matches.

Marske and Liversedge spent Christmas Day on 46 points each, with the latter earning the title of “top at Christmas” courtesy of their superior goal difference.

The pair have opened up a five point gap to third place Shildon, with Marske holding a game in hand on the Railwaymen.

Top scorer Adam Boyes has set an astonishing goal scoring pace this campaign, with a staggering 35 goals in 28 appearances so far this season.

After reaching the Fourth Qualifying Round of the FA Cup in the 2020/21 season, losing out to 2018 FA Trophy victors Brackley Town 5-1, the Seasiders reached the same stage of the competition this season with some terrific performances.

The run began with a 7-0 thrashing of Bridlington Town, before overwhelming Seaham Red Star 6-0 in the First Qualifying Round.

Marske went in to post one of the performances of the season after thrashing Chester 4-0 in the replay.

The Seasiders then faced fellow North-East side Gateshead in the Fourth Qualifying Round, holding the Tynesiders to a 0-0 draw before being narrowly edged out 3-2 in the replayed fixture.

Manager Michael Dunwell says the Anchors are looking to continue their impressive run of form in the Teesside Derby against Marske United on Monday.

Stockton’s 3-2 victory against Stocksbridge Park Steels was their fifth in a row in all competitions, with just one defeat in their last 11 outings.

“Anybody can beat anybody in this league as we’ve seen with the results over the last few weeks and months”, Dunwell said.

“We’ve just got to go there with confidence, not play within ourselves and take the game to Marske.

“It’s going to be tough, we would say they’re the best team in this league and they’ve shown that with their performances in the first half of the season in the league and FA Cup.

“We go to win every game, that will be our aim on the day, it’s going to be tough but we’ve just got to go there confident.”