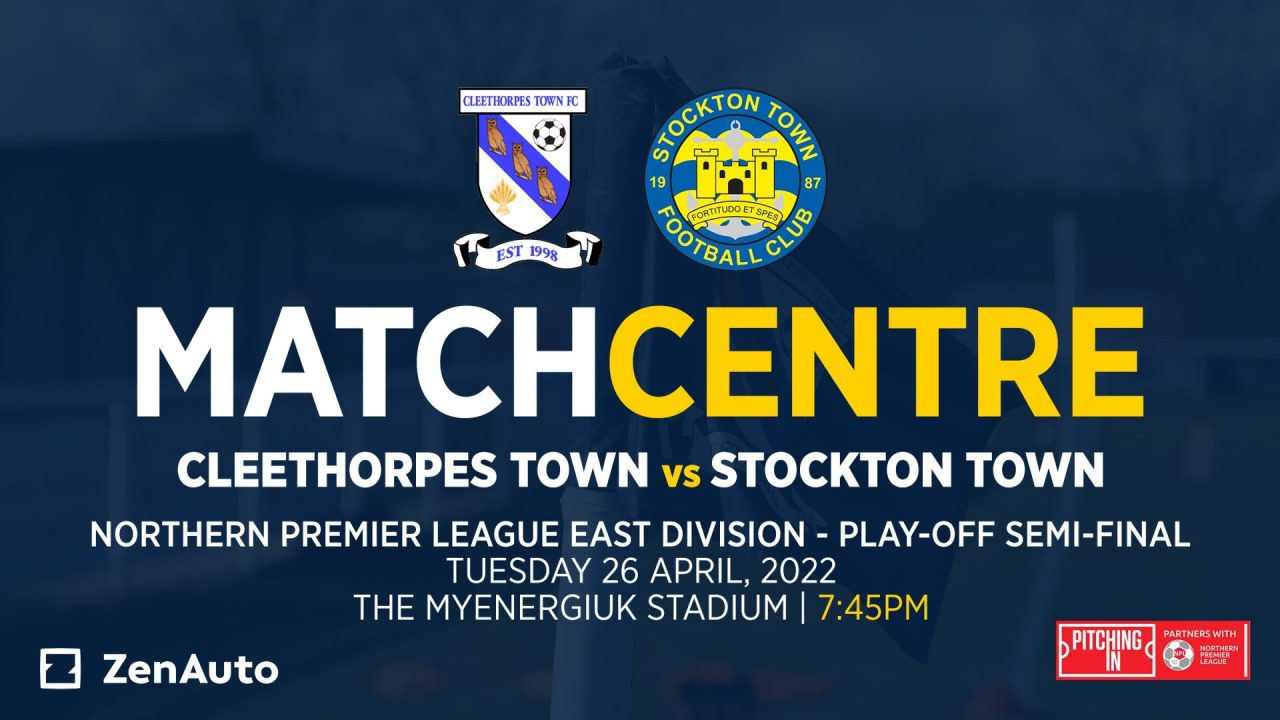 Stockton Town face one of the biggest fixtures in the club’s short history as they make the long trip to Cleethorpes Town on Tuesday night for a historic play-off semi-final.

The game will be the first ever time the Anchors are involved in a promotion play-off match, coming in their maiden campaign at Step 4.

It is a remarkable achievement for Michael Dunwell’s side, who finished fourth in the Northern Premier League East Division just 11 months after being elevated into the league following the restructuring of the Non-League pyramid.

Stockton head into the semi-final off the back of a convincing victory at the division’s in-form side Brighouse Town, with a few hundred Anchors fans heading to West Yorkshire in traditional fancy dress for the final away game of the season – which fell on St. George’s Day.

Nathan Mulligan opened the scoring with a well taken first-half penalty, with Nathan Steel and Kev Hayes scoring in the second-half to send Dunwell’s side to Cleethorpes with a positive performance.

Stockton entered the final day with hope of finishing third and acquiring home advantage for the semi-final, however Cleethorpes saw off Hebburn Town with ease to earn that third spot.

Both Mikey Roberts and Kev Hayes sit on 19 goals in all competitions for the season and if either were to find the back of the net against the Owls, would become the first Anchors player to net 20 goals in a single campaign since Jamie Owens and Hayes achieved that feat in the 2019-20 season.

The Anchors are hoping to be backed by as many travelling Teessiders as possible – and you can still book your place on the supporters coach by clicking the following link.

TALE OF THE TAPE (LEAGUE ONLY)

The two sides meetings in the league this season were two tight affairs, with Cleethorpes coming from behind to win at the MAP Group UK Stadium, before a goalless draw on the Lincolnshire coast in March.

Cleethorpes Town head into the play-offs off the back of a convincing win at mid-table Hebburn Town on the final day.

Jon Oglesby got the Owls off the perfect start with the opening goal in the third minute, with Luke Lofts, Oglesby and the dangerous Brody Robertson adding to a comfortable scoreline.

Dave Smith’s side secured third spot in the division with that final day win and welcome the Anchors back to the myenergyuk Stadium just six and a half weeks on from their previous meeting.

Cleethorpes sealed their place in the play-offs with a 3-0 win over relegated Frickley Athletic on April 2nd, with the Anchors ensuring of their own spot a week later.

The Owls win at Hebburn was their first victory since that game, having failed to score in defeats against Pontefract Collieries and play-off compatriots Shildon, and a stalemate at home to once play-off challengers Worksop Town.

Cleethorpes broke their attendance record for a competitive fixture in their last home game as 626 watched the match against Worksop Town.

The Owls are a dangerous side going forward and scored the fourth most goals in the division, behind Liversedge, Marske United and Stockton Town.

Brody Robertson, their top goalscorer, netted the equaliser against the Anchors back in September and also scored in their last game against Hebburn.

Scott Vernon also netted double figures in the league and Jack McMenemy, who scored a brace at the MAP Group UK Stadium, are also ones to watch out for.

He said: “Tuesday is massive. It’s a shoot-out, one off, we need everybody there from Grimsby and Cleethorpes.

“You need to get behind the team for this one game, hopefully two games, we need you all.”

He said: “It’s a one off game. When we went there earlier in the season I think both sides were probably happy with a point at the time.

“Neither team really went for it so I think it will be a really different game on Tuesday, both teams are going to want to win the game.

“It will be a tough game but a tough game for both sides, we’ve just go to go there full of confidence, the morale in the squad is really high so we couldn’t be in better shape.

“We should have Adi [Nicholson] back, Shane [Henry] is looking better but Tuesday may be too soon for him, barring that we go down with a full squad and give it a really good go.”