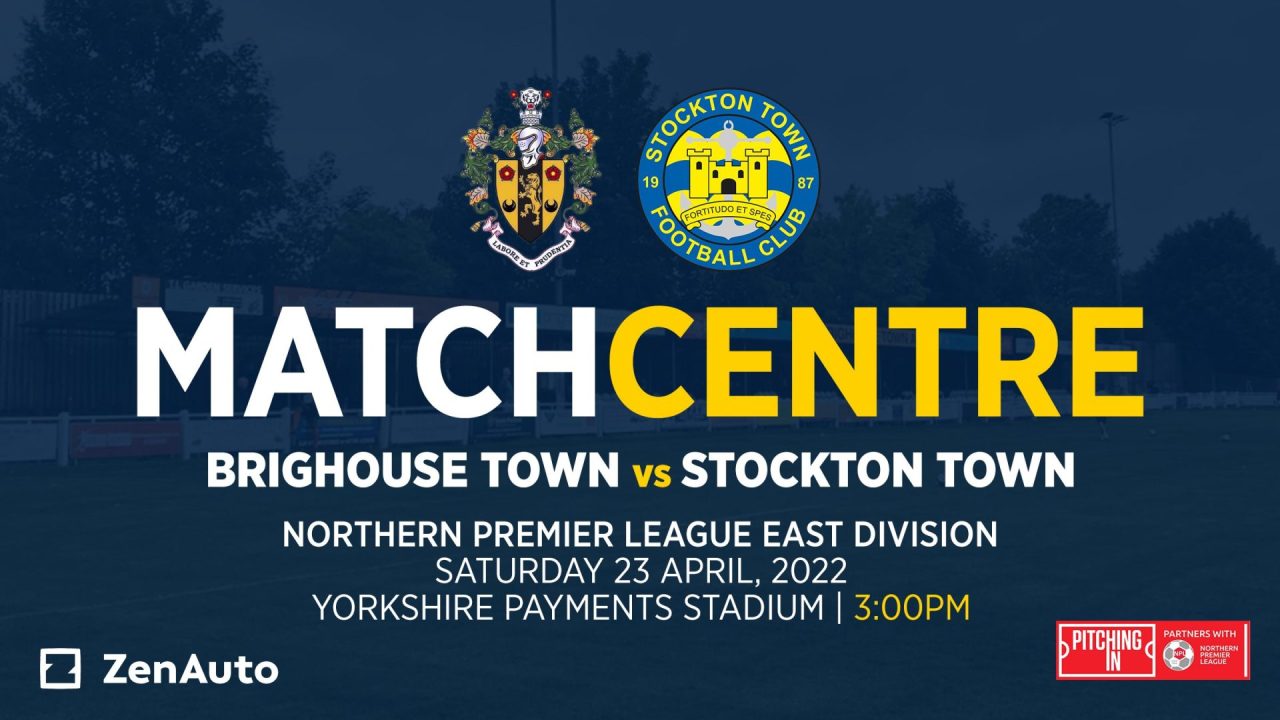 Stockton Town are back on the road on Saturday when they travel to an in-form Brighouse Town.

The Anchors secured their play-off place two weeks ago and are now looking to finish third to secure a home tie in the Play-Off Semi-Final.

Stockton currently occupy fourth and are three points off Cleethorpes Town in third. To get the coveted Play-Off home tie the Anchors need a victory at Brighouse coupled with a defeat for Cleethorpes in their trip to Hebburn Town.

Stockton could end up failing to fifth if they lose to Brighouse and Shildon defeat Frickley Athletic. Last weekend, Stockton were unlucky to only come away with one point from their two games.

They went to Worksop Town with a depleted squad and fell behind within the first ten minutes but clawed it back level in the second half. They were in the ascendency to win all three points but conceded a penalty in the final five minutes to lose 2-1.

On Easter Monday, in a big game against Teesside Rivals Marske United they fell behind early but came back through an excellent free-kick from Nathan Mulligan and a Nathan Steel tap-in.

They appeared cut and dry to claim all three points but former Middlesbrough midfielder Jason Kennedy popped up a late equaliser for the Seasiders.

This is the second meeting between the two clubs. In the reverse fixture Stockton Town beat Brighouse Town 3-2.

Brighouse Town are one of the most in-form teams in the Northern Premier League East Division after going unbeaten in their last eight league games.

They had been on a five-match winning run before settling for a draw at all but confirmed title-winners Liversedge.

It is form that has moved them from mid-table to being on the cusp of the Play-Offs. Unfortunately for them they were never able to bridge the gap and see their campaign end.

Striker Laurence Sorhaindo is one to watch for Brighouse. He is the league’s second highest goalscorer with 22 goals and fired in a first half equaliser when the club’s met in December.

Attacking midfielder Jack Boyle is also to be wary of, he has ten goals in all competitions and is the only other player to hit double figures this season.

Speaking following the 1-1 draw at Liversedge, manager Vill Powell said: “Despite the fact they have secured a play-off position they don’t want to go into their play-off games on the back of defeat, so they will be coming to us and throwing everything at us.

“Obviously we have to make sure that we match that.”

Speaking after the 2-2 draw with Marske United, Assistant manager JD Briggs said: “We are still clearly in the mix (to finish third) everybody has their own issues to deal with on that day.

“You don’t want to be Cleethorpes having to drive three hours and go to Hebburn who have got nothing to lose in that game. I certainly wouldn’t want to do that.

“Brighouse are on good form at the minute but we are a very good team. Obviously Shildon have struggled today so we will see what they can do.

“But it is all about getting balance right between that and the Tuesday game (Play-Off Semi-Final).”