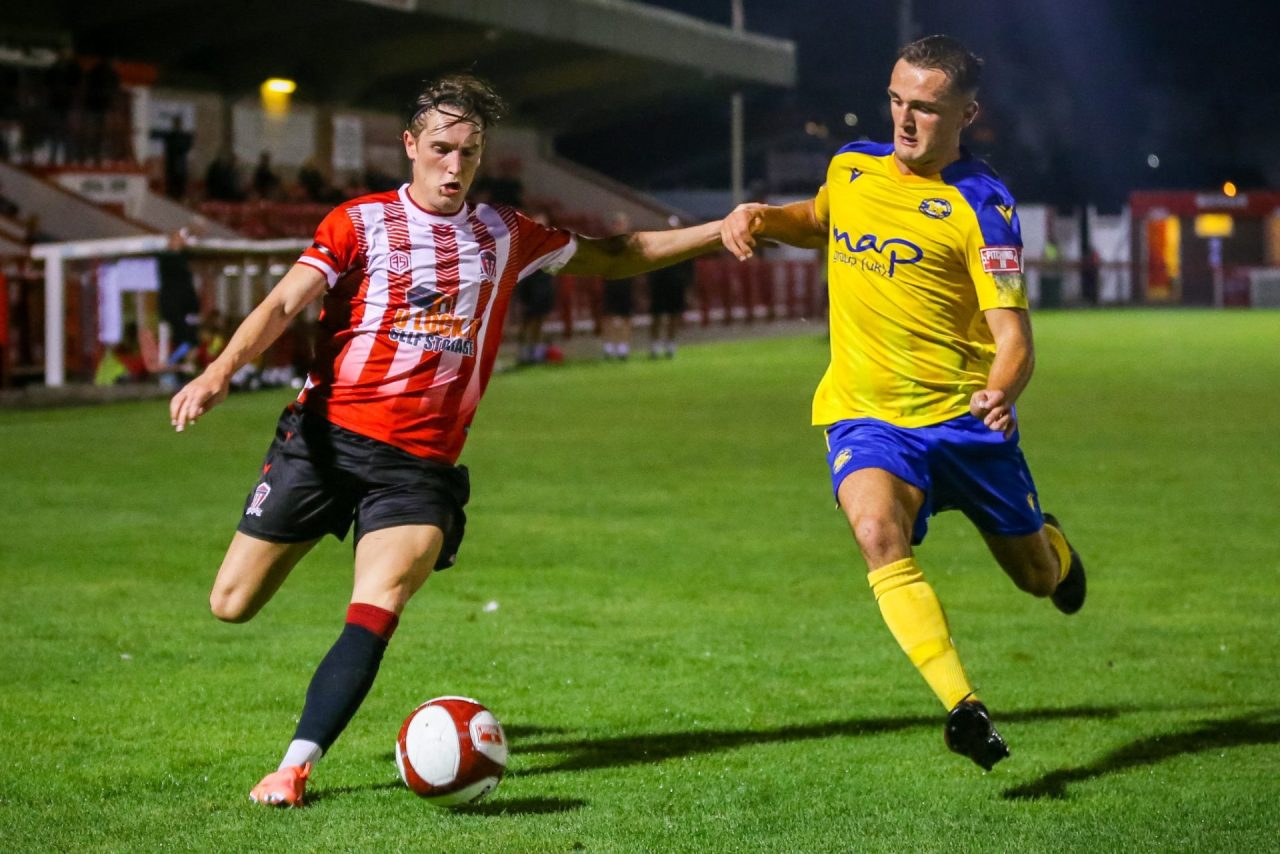 Stephen Thompson scored a stoppage winner as Stockton Town completed a second half comeback to win their first ever FA Trophy game at Witton Albion.

The Anchors were two goals down after three minutes when Elliot Rokka and Joe Duckworth netted for the home side.

Witton were reduced to ten men when Prince Hayworth saw red for dissent. In the second half Stockton drew level through goals from substitutes Cameron Painter and Tyrone O’Neill.

Witton restored their lead when Duckworth converted from the penalty spot. Painter completed his brace to once again level the game.

In stoppage time Thompson gave Stockton the lead for the first time with what proved to be the winner.

The game started at the later time of 8pm due to Stockton’s delayed journey.

That proved to be the early undoing of the Anchors who conceded instantly. A quick break from the home side saw Rokka played in and he fired home.

After three minutes it was turning into a nightmare for Stockton when Duckworth was released and his effort hit the post before nestling in.

Shortly after the quarter mark Stockton were forced into a substitution with O’Neill coming on to replace Elliott Beddow.

The Anchors began to get more into the game and they had a decent chance when Kevin Hayes flashed an effort over from the edge of the area.

They then had the ball in the net when Nathan Mulligan’s effort was diverted in by O’Neill. However the linesman adjudged the latter to be in an offisde position.

Minutes later they did have a lifeline when Haywood saw red for dissent after he brought down Mulligan.

The second half saw two big substitutions for the Anchors with Liam Cooke coming on to replace Mikey Roberts and then Painter on to replace Mulligan.

Painter made an instant impact and reduced the deficit to one when he guided the ball over the goalkeeper when he was played in.

Cooke then made his contribution with a ball across the box which was converted by O’Neill for his first goal of the club to make it level.

It appeared as though that hope may turn to heartbreak when Witton were awarded a penalty after Roberts brought down a player in the area. The penalty was emphatically fired home by Duckworth to restore Witton’s lead and complete his brace.

But Stockton were not going to lie down and Painter popped up with another goal when he expertly took down Lewis King’s cross and stuck home.

Stockton then pressed for the winner. First Hayes struck the post when the ball found him in the box. Then Tom Portas saw his attempted ball into the box narrowly diverted wide by a Witton defender.

From the resulting corner Cooke’s ball in was headed in by Thompson who outfought a sea of bodies to cue pandemonium on the visiting bench.

That completed a historic comeback for Stockton who recorded their first ever FA Trophy win. In the next round they travel to local rivals Hebburn Town who beat Trafford 2-1.