It wasn’t the same without fans, admits defender Dan McWilliams 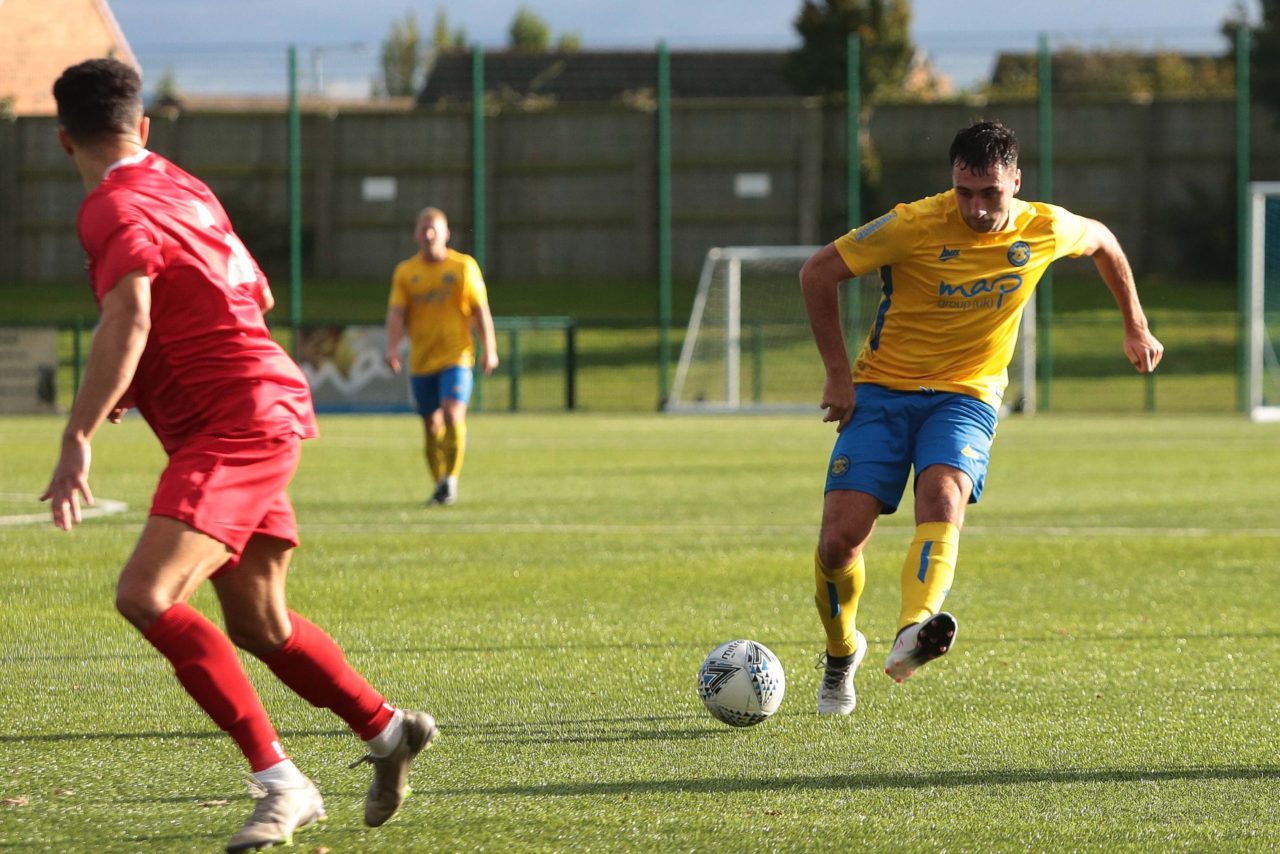 Defender Dan McWilliams has admitted that the players have missed the “incredible” support from the Stockton Town fans during the 2020-21 campaign.

McWilliams, who joined the Anchors from Whitby Town in July 2019, has played every minute of the campaign so far, scoring one goal and providing four assists from the left flank.

The 27-year-old is an important member of Michael Dunwell’s squad, having passed 50 appearances in all competitions in September 2020, and amassed 62 appearances for the club to date.

Stockton Town averaged 500 fans at the MAP Group UK stadium last season, but attendances have been restricted this campaign to 150 and 300, and the defender acknowledges the Anchors supporters as the “12th man”.

“Home or away, the Stockton support is always so good and acts like a 12th man for us.” McWilliams said.

“Last season, we had 600 fans at home and it always provided a massive boost for us players on the field.

“Away games often felt like home games because of the incredible travelling support the club has.

“It hasn’t felt the same this season without the big crowds so the sooner we can have fans back in full the better.”

It is now over a month since the Anchors were last in competitive action – in the Buildbase FA Vase – and McWilliams believes Stockton Town were “finding our rhythm” when the campaign was paused.

He said: “We had a slow start [to the season], but we then started to build momentum and play like we did last season.

“We felt that we were missing that bit of luck, the fine margins that went our way last season weren’t coming for us early doors.

“As the season progressed we found our rhythm and started to play a lot better, which reflected in our results.

“We started to take the chances we were creating and that gave us confidence to go out and get results consistently again.”

Dunwell’s men have enjoyed several big wins this season, including a 5-0 victory at Whickham and a 7-1 thrashing of Seaham Red Star, and the defender believes the Anchors are always capable of producing such results.

“Even when we weren’t winning games, we always felt that the chances were going to come and that one game it will all come together to put five or six past teams, which is what happened,” the full-back said.

“I’m sure we would have produced more results like those throughout the season.”

The Anchors trailed Hebburn Town by six points when the season was paused, and McWilliams insists that the Hornets were still in sight.

McWilliams added: “We still had to play them [Hebburn] twice and all it takes is a couple of bad results and we were right in the mix.

“We have had a good record against the better teams in the division over the last couple of years, as our style suits an open game.

“I’m pretty confident that if the campaign had continued we would have gone on to win the title.”

The ‘Project Non-League’ proposal has circulated the non-league scene in recent weeks as the potential for a second campaign to be declared null-and-void looms large, which would be damaging to many clubs in the non-league arena.

Stockton Town were 13 points ahead of closest challengers Shildon with just eight games remaining when the 2019/20 season was brought to an abrupt end in response to the emerging Covid-19 pandemic.

The Anchors, who lost just once in the Northern League last season, had also won 16 of their last 20 matches before the shutdown, including a Northern League club record run of 11 consecutive wins.

Dunwell’s side would be champions on points-per-game under the ‘Project Non-League’ system, but any decision is yet to be ratified by the FA Council.

McWilliams revealed his thoughts on the proposal: “It would be bittersweet, we [the management and players] wanted to win the league the right way with results on the pitch.

“Everyone at Stockton Town knows the aim is to get promoted, you want to do it properly and win the league on the pitch, so it would be disappointing if we didn’t get the chance.

“We know we would have been promoted and that we were the best team in the Northern League that season.

“However, we also want to test ourselves against teams at the next level. Stockton Town, as a club with the infrastructure and support we have, are built to go up to the next level.

“If we were to remain in the Northern League, everyone at the club will have lost two years of progression in the prime of their careers, which would be really disappointing.”

The Anchors have played 42 league games over the ‘Project Non-League’ period, winning 32 games and keeping 22 clean sheets in the process, the left-back believes the consistency shown is testament to the strength in depth at Dunwell’s disposal.

He said: “If you look at our team, not just our starting 11 but the bench as well, we have strong squad. If you pick up the odd injury or suspension, the players you bring in are not weakening the team.

“It is a good group of lads [at Stockton Town], who have the right mentality and want to go out and win games of football, which bred confidence as we kept winning games.

“We got into a routine, last season in particular, where winning became a habit in the squad and we were disappointed if we failed to pick up all three points.”

McWilliams is confident that the club will be able to overcome any obstacles in its way and has praised the structure at the MAP Group UK stadium.

“I think it is the best run club I’ve ever been a part of, from the management to Martin [Hillerby] to everybody involved with the football club,” McWilliams said.

“I’m confident that we would be able to draw a line under any disappointment and go and get promoted, with the team and structure we have.”

Despite the resumption of Northern League football looking unlikely for time being, the left-back has a message for Stockton Town supporters: “From all of the players, the support is massively appreciated and sorely missed when they aren’t there.

“The fan base at Stockton Town is massive, they make a big difference so hopefully they stick with us when they can come back.

“The main thing is that they keep safe and look after themselves, so as and when we are allowed to play football again, the support is bigger and better than ever before.”