Our Football Development Officer Paul Midgley reports on the success of our latest Holiday Course held at the Club during the half term holidays.

Thank you for everyone who attended our recent holiday camp, I think it has been our most successful one whilst I have been in my post.  Over the week we coached 71 different children with a wide range of age, ability and both genders.  It was a pleasure to organise as the children did not disappoint when it came to standards.  We had a bit of a different set up with more specific topics over different days, Monday saw them learn the importance and difference between running with the ball and dribbling. Tuesday we did Shooting and Finishing, Wednesday 1v1s, 2v2s, 2v1s, 3v2s and in balance and out of balance play on a small scale and the key principles of it. Thursday saw the best day of the week “Tournament Day”, 5 teams with 2 legs of games (before lunch and after lunch), dinner time saw the captains negotiate in the transfer window where swaps where allowed and some great buys there was.  The Team that were 2nd bottom went on to win the Tournament due to some crafty business by their captain.  Friday was fun day with some awards to be won, crossbar challenge, king of ring winner, penalty shoot out winner to name a few.

The week was exceptional and could not be done without coaches James Risbrough (Munchie), Ben Johnson, Lewis Johnson and Tom Ward – they work hard to ensure the children get something out of each session and these days are mentally tough but they were superb last week.

Once again thank you to everyone who attended and hopefully you enjoyed it as much as we did.  See you all at the next one. 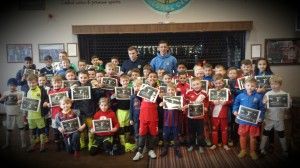 The Players with their Certificates after completing the Holiday Course at the Club during last half term.