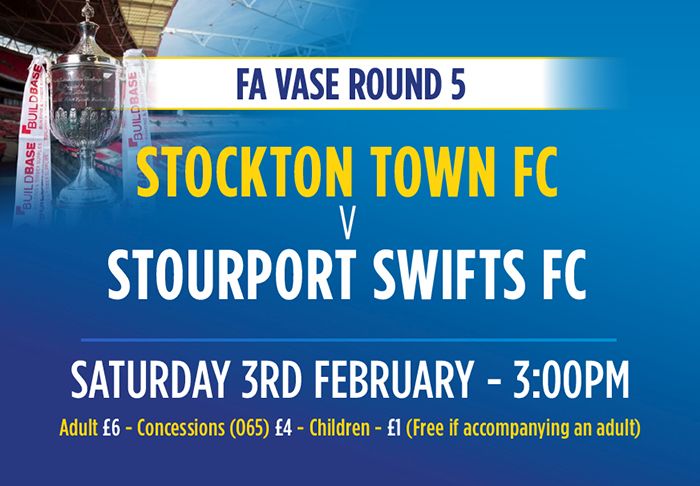 As the excitement builds towards Saturdays last sixteen tie in the Buildbase FA Vase against Stourport Swifts their has been some excellent previews produced detailing all the remaining fixtures. None better than the one produced by “Base of the Pyramid” (@BasePyramid) which you can read here.

The arch is looming on the horizon. The FA Vase is down to the last sixteen teams and you could forgive anyone associated with those clubs for dreaming of a Wembley appearance in May. However, there are still a few hurdles to negotiate, not least the Fifth Round, scheduled for Saturday 3rd February 2018.

Following their extra-time victory over Desborough Town, Stourport Swifts become the Base of the Pyramid adopted team in Round Five. They face a long trip to the North-East and a tie against Stockton Town. In this article we look at that game and the other seven intriguing fixtures.

Before we go into detail on each game, let’s have a look at the way the bookies think the Vase may go this year. As of 29th January, these were the odds on each team:

Marske United, the highest ranked Northern League team in the competition are out there as favourites, which is not that surprising when you look at the recent dominance of the Northern League and the current league position of Marske (they are currently in second place). What is slightly more interesting is the fact that Wolverhampton Sporting Community, the last remaining Step 6 outfit, are only 16/1, better odds than eight teams who play in a Step above them.

As for league representation. Both the Hellenic League and Midland League still have three teams in the competition. The Northern League, Spartan South Midland and Western have two, whilst the remaining teams come from Wessex, West Midlands Regional Premier, North West Counties and Southern Combination.

So on to a little bit of detail about each tie, followed by the bookies projected outcome and (I will live to regret this) the BotP projected outcome. Please don’t be offended if I don’t pick your team to go through. It’s only a game…isn’t it? Besides, if I was any good at picking scores, I would be writing this from my beach-house in Bali, not the back-room in Bicester.

​Wolverhampton Sporting Community v Leighton Town.
In some ways, the most intriguing tie of the round. Step 6 outfit, Sporting, at home to a Leighton Town side who, in recent months, have emerged as serious promotion contenders in the SSML Premier. Sports have already seen off four Step 5 sides in this season’s competition, and the home draw gives them an extra edge. At the weekend, Leighton kept pace at the top of the table with a 3-2 win over Crawley Green whilst Sports had a free weekend. The romantic in me wants to see the Step 6 side progress but I have a feeling that Leighton have hit form at just the right time and will sneak this one.
Bookies Odds – Wolverhampton Sporting Community
Pyramid Pick – Leighton Town
​

​Thatcham Town v Bromsgrove Sporting.
Two teams that are also flying very high in their respective leagues. Despite seeing their top of the table clash with Highworth postponed in midweek, Thatcham recorded a 3-1 victory at Fairford on Saturday and climbed to the top of the Hellenic Premier. Sporting, however, are also in top form and their 2-0 win at AFC Wulfrunians saw them close to within five points of Coleshill with two games in hand on the leaders. This really could go either way. Both sides are in good form and both will probably have their sights set on a promotion push. The bookies see Sporting as favourites but I am sticking with my instinct and going for home advantage winning the day.
Bookies Odds – Bromsgrove Sporting
Pyramid Pick – Thatcham Town
​

​Marske United v Bradford Town.
​In the eyes of the bookies, this is a clash between the favourites and the rank outsiders. It’s a long trek from Wiltshire up to the North Yorkshire coast but the Western League outfit have proven that they travel well this season, with only one defeat on the road. Marske, who didn’t play at the weekend, relinquished second spot to North Shields. However, they have a massive seven games in hand on both teams above them. Bradford also got the weekend off and remain in fourth spot. I’m with the bookies in this one. The combination of the long trip and home advantage for Marske will see them over the line.
Bookies Odds – Marske United
Pyramid Pick – Marske United

Coleshill Town v Bracknell Town.
​An interesting clash between two sides who play their home games on an artificial surface. Normally this would give the home side a slight advantage but, in this case, the surface should pose no problem to either team. The Colemen have a five point lead at the top of the Midland League and will probably have one eye on the threat to their promotion hunt posed by Bromsgrove Sporting. The Robins, who currently sit fifth in the Hellenic Premier, have four games in hand on Highworth and may also fancy their chances of a title tilt. Another tie that could easily swing either way but I just fancy Bracknell to eventually progress after a very tight contest.
Bookies Odds – Bracknell Town
Pyramid Pick- Bracknell Town

​1874 Northwich v Chichester City.
An interesting choice to be made by 1874 this midweek. They have a huge local derby against Northwich Victoria scheduled on Tuesday evening, but will not want to pick up any injuries before the big Vase clash on Saturday. Whatever happens, it’s going to be a hectic few months in Cheshire with so many games left to pay. Incredibly, 1874 have 14 (FOURTEEN) games in hand on second-placed Widnes and could, in theory, top the league if they were to win all of their spare games. Chichester also did not play at the weekend and are placed third in the table. Their league interests will certainly have been improved by leaders Haywards Heath’s unexpected 4-1 home defeat to Three Bridges. I can’t see past 1874 in this one. Home advantage plus the teams currently winning mentality, should see them progress.
Bookies Odds – 1874 Northwich
Pyramid Pick- 1874 Northwich

​Stockton Town v Stourport Swifts.
The current BotP adopted team, Swifts, did not have a game at the weekend and may still be casting a few glances over their shoulders in the league. Ten points clear of the bottom and with a couple of games in hand but they could still do with a few more wins to make things safe. Stockton, meanwhile, fell at home to North Shields at the weekend by 3-1, a result that saw them lose a place in the table. Once again, I have to go with the bookies, despite Swifts being our adopted team, i just think the Northern League side will have too much strength.
Bookies Odds – Stockton Town
Pyramid Pick – Stockton Town

Windsor v Hamble Club.
Windsor were another side to get a free day this weekend. They are comfortable in mid-table and can safely concentrate their efforts on the Vase. Hamble, also in a very safe league position, edged past Cowes Sports by 3-2 at the weekend. Neither club has anything to lose by giving the Vase their utmost attention. Despite Hamble being shorter odds than their opponents, home advantage will prove to be a decider in my opinion.
Bookies Odds – Hamble Club
Pyramid Pick – Windsor

Melksham Town v Tring Athletic.
Melksham’s 2-0 win over Brislington at the weekend sees them remain in contention at the top of the Western Premier, just about. They are still eight points adrift of Street, who have two games in hand as well. Tring fought out a 0-0 stalemate with fellow relegation threatened side Oxhey Jets. It’s very difficult to see past a home win in this game, a view shared by the bookmaker’s odds. Athletic may well be happy to spend their efforts on avoiding the drop from the SSML Premier Division.
Bookies Odds – Melksham Town
Pyramid Pick – Melksham Town

Good Luck to all sixteen clubs and may the best teams progress.