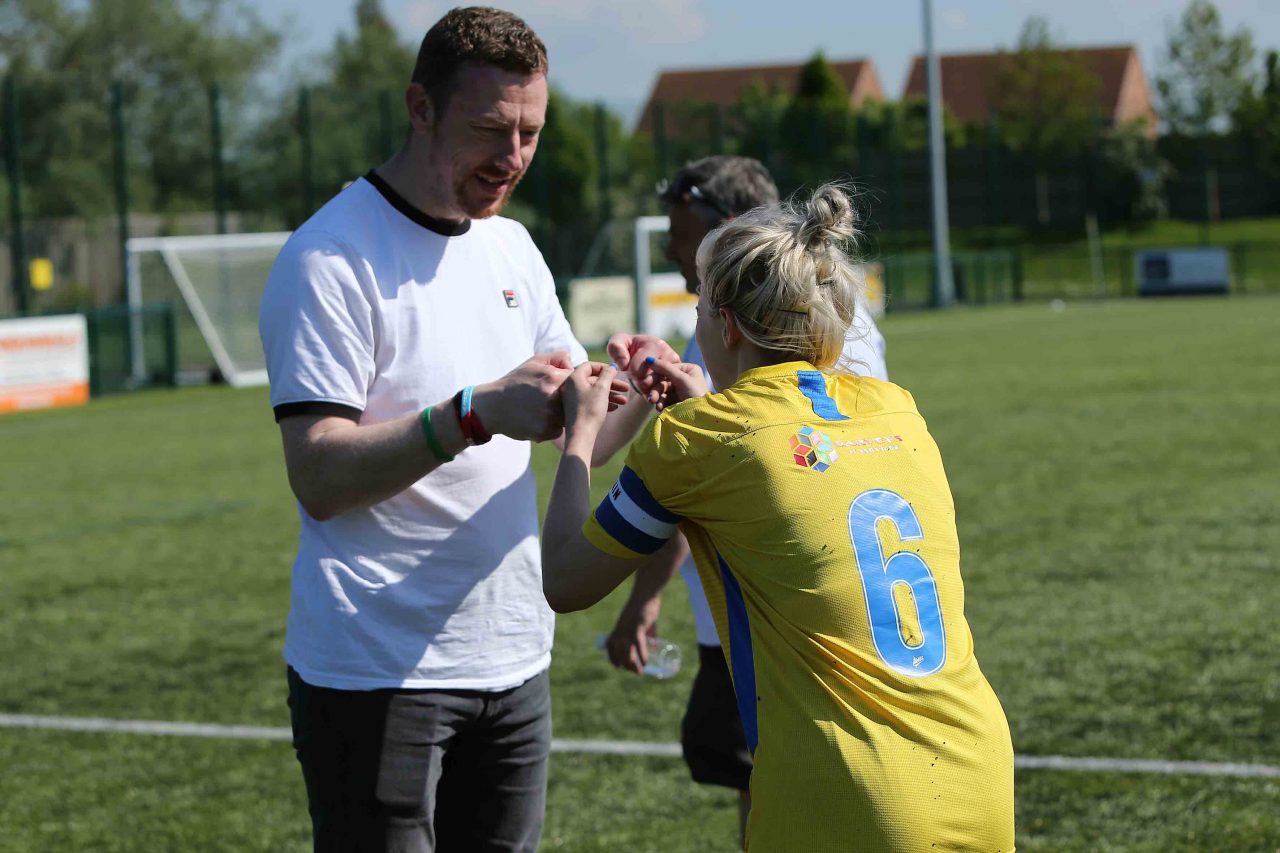 Stockton Town Ladies manager Dave Critchlow spoke of his pride after watching his team earn promotion for the first time on Sunday afternoon.

Critchlow, who took over the Ladies last summer, watched on as the Anchors beat East Durham Blue Belles 7-0 to secure a second-place finish in the league – and promotion.

Eight consecutive wins saw the Ladies turn their form right around, and Critchlow believes the team should be “really proud” of what they’ve achieved this season.

“We set ourselves a bit of a challenge at the start of the season, we didn’t start too good. We struggled initially with numbers, but then we added to the team, and that really changed us.

“We had that impetuous as soon as we started to get that ball rolling. Since lockdown, we’ve be absolutely brilliant.

“I’m very proud of the ladies. They deserve all of the credit. They go out over that white line, they have to perform, and they’ve done that. They should be really proud of themselves.”

Critchlow admitted he wants to play a brand of football that “puts smiles on faces”, and the free-flowing, attacking performances will have certainly done that this season.

With the likes of Zara Johnson (21) and Abbey Loughran (10) leading the way in front of goal, the Anchors’ difficult start to the campaign soon turned around.

Having picked up just one win from their first four games, the Ladies went on to surge up the league table – winning eight straight games.

Sixty-one goals were scored in those eight games by the Anchors, form which saw the team secure promotion – and it was a feeling of “elation” for the team when the full-time whistle blew.

Critchlow added: “It’s just a feeling of elation really, everyone was just so happy. I know we’ve got the quality in our team to beat anyone on the day.

“Everyone was absolutely buzzing. You could hear the cheers and what it meant to people – not just the players, but the supporters as well.

“That’s what it’s about, we want to build the women’s game at this clubs and build that fanbase. We’ve got a fan that turns up to watch us, Ian Wolf, and he deserves a mention because he’s been a real strong supporter of us as well.

“I want to play football in a way that puts smiles on people’s faces, and we are starting to do that.”

Having played the majority of games behind-closed-doors this season due to the Covid-19 pandemic, Critchlow was delighted to have fans back for the final two games, and being able to celebrate promotion with them.

“Football is nothing without the fans,” he said. “I know that term has been said a lot, but it’s so true. We’ve seen family members of the players, friends, fans and we do it for them.

“Hopefully we never have another situation where they’re not with us. That one is for the people that have supported us.”

The Ladies will play in the DCFA Women’s Division One for the first time in their short history in the 2021/22 campaign, and Critchlow believes the team have the capabilities to compete at the top.

“It has to be the aim (promotion),” he added. “I don’t set low targets. We want a double promotion, there’s no doubt about it.

“Our end of season performances and results showed what a strong side we have, and we should not go into the next league fearing anybody.

“My expectation is to win the league. If I wouldn’t aim for that, then there’d be no point in me turning up because that’s all I want.

“We go into every game, whether that be a league game or a friendly, wanting to win, and anything else is a diversion, I don’t like that and don’t play like that.

“We want to win the league. It’s going to be hard. I’m definitely not saying it’s going to be easy, but we can mix it with them and we need to go into next season believing that.”