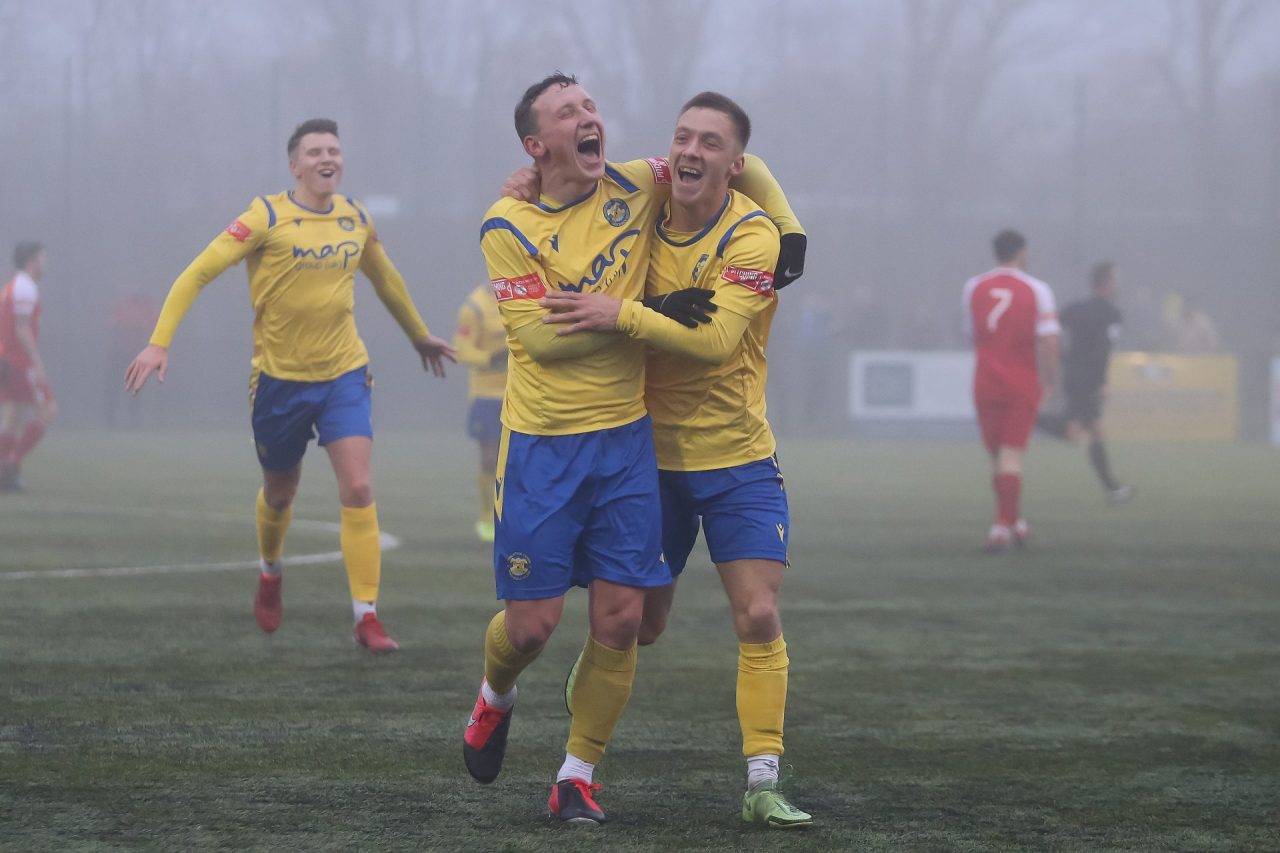 The game featured three goal of the season contenders, with Kev Hayes landing the first blow with a wonderfully curled effort midway through the first half.

With visibility worsening as fog settled in the Teesside air, Joshua Nodder gave the away side the lead just before the hour mark with another fantastic strike from 30-yards, before the Anchors drew level 15 minutes from time through an own goal from Lee Cooksey.

As Stockton pushed forward for a winning goal, Reece Fielding was dismissed for second bookable offence as the visitors looked to break the game up to hold on for a point.

However, the Anchors got their just rewards for their perseverance with a winning goal six minutes time, Nathan Mulligan’s free kick rebounded into the path of Tom Coulthard who turned home his first goal of the season.

The three points mean Michael Dunwell’s side hold a seven point advantage over sixth placed Dunston at the halfway point of the season.

Dunwell made two changes to the 4-1 victory at Hebburn Town in the previous league game, with Jamie Owens and Liam Cooke starting in place of Nathan Steel and Alfie Conway.

The game started off slowly with neither side building many dangerous attacks early on, Shane Henry and Liam Cooke with the only efforts of note in the opening quarter of the game.

Stockton took the lead after 23 minutes, the hosts broke forward on the counter-attack and Hayes curled a shot into the far corner from 20-yards.

Mikey Roberts had the chance to double the Anchors’ lead just five minutes later, his shot was blocked and the hosts were counter punched just seconds later as Crofts lashed an effort in from 25-yards.

Nodder forced Callum Roberts into a save before Hayes and Cooke had efforts for Stockton saved.

Mikey Roberts almost added another spectacular goal ten minutes before the break, a marauding run from Dan McWilliams found the forward who looked to curl his effort into the top corner and it was narrowly wide.

The fog settled further as darkness fell and Mikey Roberts was again involved as his side footed effort fell narrowly wide inside the six-yard box.

Crofts beat the offside trap to go one-on-one with Callum Roberts and the Stockton ‘keeper stood tall to deny the goalscorer.

The away side took the lead on the hour mark through another goal of the season contender, Nodder smashed the ball home from 35-yards.

Stockton pushed forward in search of an equaliser and were rewarded just under 20 minutes from time, Nathan Mulligan’s cross was turned into his own net by Cooksey.

Stocksbridge looked the break up with persistent fouling and time-wasting, Hayes hit a free-kick straight at the visiting ‘keeper.

Steels were down to ten men when Fielding was dismissed for second bookable offence and Stockton took advantage as Nathan Mulligan’s free-kick was knocked down to Coulthard who stabbed the ball home from close range.

The hosts could have increased their advantage late on as Nathan Mulligan hit the crossbar from a 20-yard free-kick and sliced a shot just wide.

Stockton’s win is their fifth in a row in all competitions and they’ve also lost just one of their last 11 games.