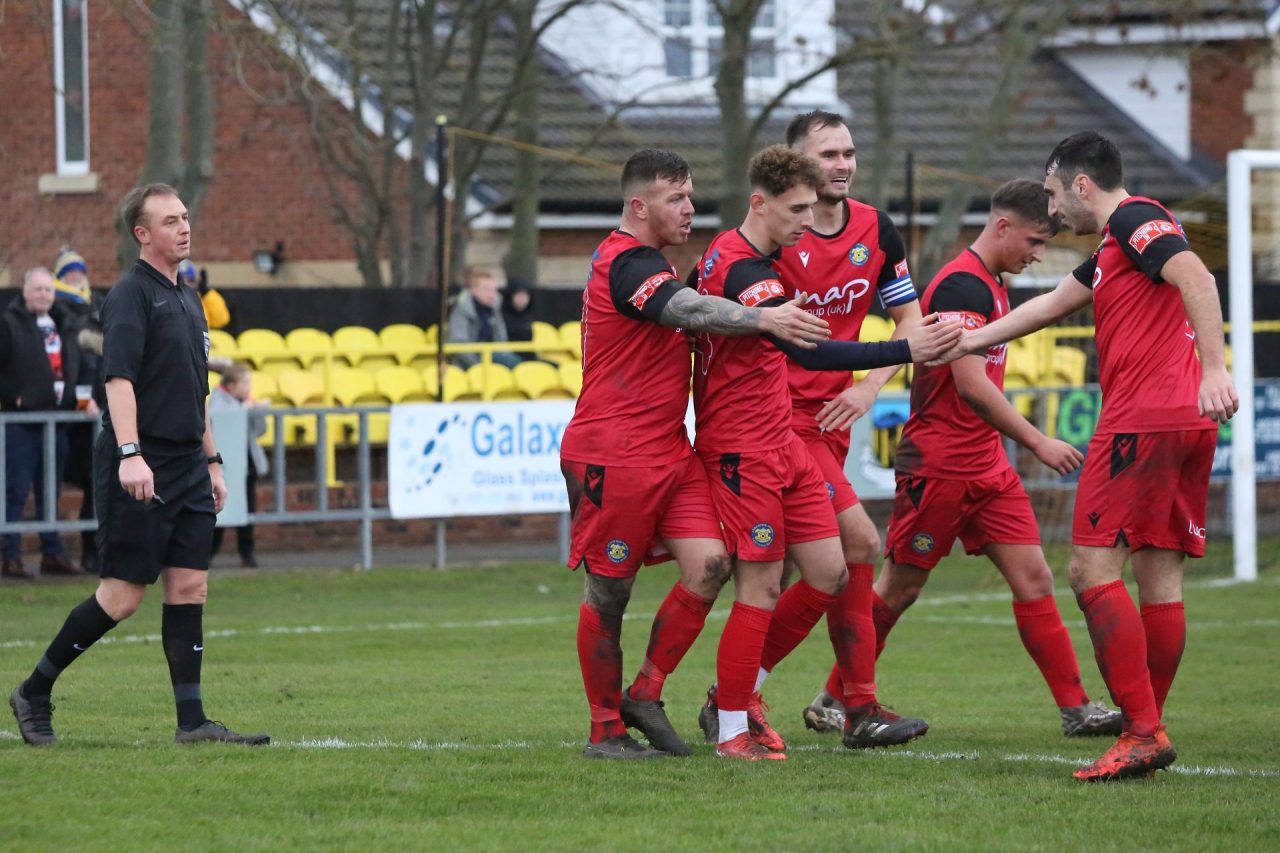 Liam Cooke scored his first Stockton Town goal as the Anchors blew Hebburn Town away with a dominant second-half performance.

Kev Hayes slotted Stockton into the lead early on before Oliver Martin equalised for the hosts.

Nathan Mulligan smashed the visitors ahead shortly into the second-half before Stockton pressed their foot down and doubled their lead through Cooke.

Kev Hayes wrapped up the three points late in injury time as the Anchors piled more misery onto a Hebburn side who now have lost six of their last seven games.

Michael Dunwell named one change to the side which defeated Brighouse Town 3-2 last Saturday, with Jamie Owens starting in place of Nathan Steel.

Michael Richardson had the first chance of the game, the Hebburn midfielder looked to chip Callum Roberts but the Anchors ‘keeper was equal to the attempt.

Stockton took the lead with their first real attack of the game, Jamie Owens’ shot was parried by Mark Foden into the path of Hayes who tucked the ball home from close range.

Both sides struggled for control on a pitch that was offering little opportunity for intricate passing, with Martin only offering a tame shot at Roberts in the opening stages for the hosts.

Shane Henry broke forward from the midfield with a trademark 50-yard run, swinging a cross into Alfie Conway who stretched connect but could only send his shot wide.

Owens intercepted the ball high up the pitch and looked to send Hayes through who shot straight at Foden.

Hebburn equalised just after the half-hour mark, Richardson found a pocket of space and pulled the ball back for Martin to tap home into an open net.

It was a slow start to the second half but it burst into life as Stockton assumed control and never looked back.

First, N. Mulligan fired over the bar from Mikey Roberts cut back before Jamie Owens turned his man and struck narrowly wide.

Mulligan rifled the Anchors back ahead as a cross from the right wasn’t dealt with and the midfielder smashed home from ten-yards.

Alfie Conway went close to extending his scoring streak to four matches with a shot that was gathered by Foden.

Cooke, on a substitute, made an immediate impact with his first goal for Stockton, the midfielder drove forward from the left and tucked his effort beyond Foden at his near post.

Stockton had great claims for a penalty when Jamie Owens was felled in the 12-yard box, then Hayes fired over from the right hand side.

Shane Henry, who was outstanding all game, almost added a goal to his performance when he drew a smart save from Foden.

Hayes rounded off a fantastic second half performance for the visitors with a fourth in added time, coolly slotting past Foden when one on one.

Up next for the Anchors is a return to South Tyneside for the Durham Challenge Cup on Tuesday evening.