Our Club Chairman Martin Hillerby was the subject of a surprise visit from Bill Scott, Patron of the Middlesbrough & Teesside Philanthropic Foundation last Saturday. The Award of Teesside Hero is awarded to those who have made a significant contribution to their local community, through their volunteer efforts. 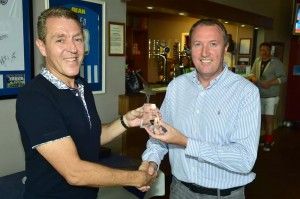 The Club had managed to keep news of the Award a secret and Martin was totally surprised when the events unfolded as he was expecting to show Bill around the Club’s facilities, therefore fulfilling a conversation that had gone on for a couple of years.

In accepting the Award Martin said, “hopefully it will be seen as recognition of what the Club has managed to achieve over recent years which has been achieved by the wider community of Stockton and the many volunteers, supporters and users of the Club.”