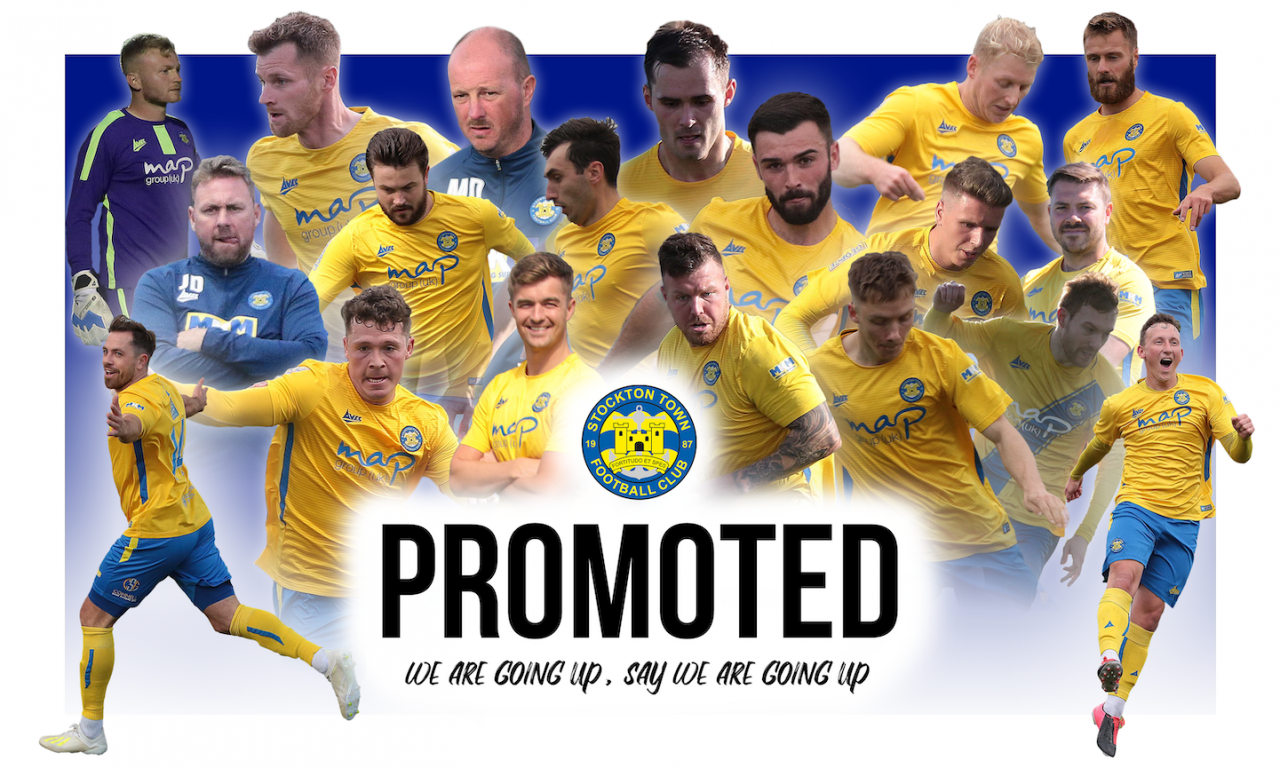 Stockton Town Football Club are delighted to announce their promotion to Step 4 for the first time in the club’s history – and will compete in the Northern Premier League East Division.

The Anchors, along with Hebburn Town and Shildon AFC, have been ‘upwardly moved’ in line with the Football Association’s restructure of Non-League football, using the combined points-per-game average from the 2019/20 and 2020/21 campaigns.

Michael Dunwell’s men were, statistically, the best side in the Northern League Division One over that period, accumulating 104 points from 42 games, an average of 2.48 points per game.

The promotion to Step 4 means that Stockton Town have gone from the Wearside League to the Northern Premier League in just five years.

“I’m delighted, Dunwell said. “That was our aim once we got into the first division. It’s a bit later than what we deserved, and nobody can question that we deserve to go up as well.

“We’ve been the best team over the last two seasons, and that shows with the points that we’ve accumulated. Points-per-game shows this, that we’re at the top of the league.

“The players are delighted, the club is delighted and we are ready for that level. It’s massive for the club. For the club itself, it shows our desire to get to the next level.

“We’ve always wanted to go through the leagues and this is another step in the right direction.”

Stockton Town lost only twice across the two seasons, and were unbeaten at the MAP Group UK Stadium, winning 19 and drawing four of the 23 games played at home.

The arrival of goalkeeper Callum Roberts, full-backs Dan McWilliams and Lewis King and defensive midfielder Tom Portas prior to the 2019-20 season improved Dunwell’s options in defense, and the rewards were evident as the Anchors kept 22 clean sheets and conceded just 22 goals across the two combined seasons.

In addition, Stockton Town conceded more than once in a match just twice in 42 games; 2-2 draws at home to Consett AFC and Guisborough Town.

Talking about the promotion to Step 4, Chairman Martin Hillerby said: “A big ambition has been achieved. I never thought that when we started off on this journey that we could possibly end up playing at Step 4.

“This team come from an old Under-18 team that I ran, that Tom Portas played in, and now he’s part of the team taking us up into Step 4. It’s an incredible achievement.

“It’s something that myself, the players, management, the club and the town of Stockton can be proud of. This club, this squad, deserve their promotion and deserve to be playing higher up.”

As the pandemic hit, the Anchors were 13 points clear of Shildon at the top of the Northern League, just five points away from securing promotion with eight matches to play.

Captain Adam Nicholson also spoke about the club’s promotion: “It’s big for the club. It’s been tough year for everyone, but I think we’ve got what we deserved, and it’s nothing but positive news for the club. We’re all over the moon.

“It was disappointing how the 2019/20 season finished, with us being so close to promotion, but nobody can argue with the decision.

“There was 42 games played across the two seasons and we’re out there on top. That’s on merit, I know we had to accept the invite, but we’ve done it on the pitch. I think it’s what we deserve.”

Stockton Town will be releasing news on season tickets for the 2021/22 season ahead of a historic season for the club.