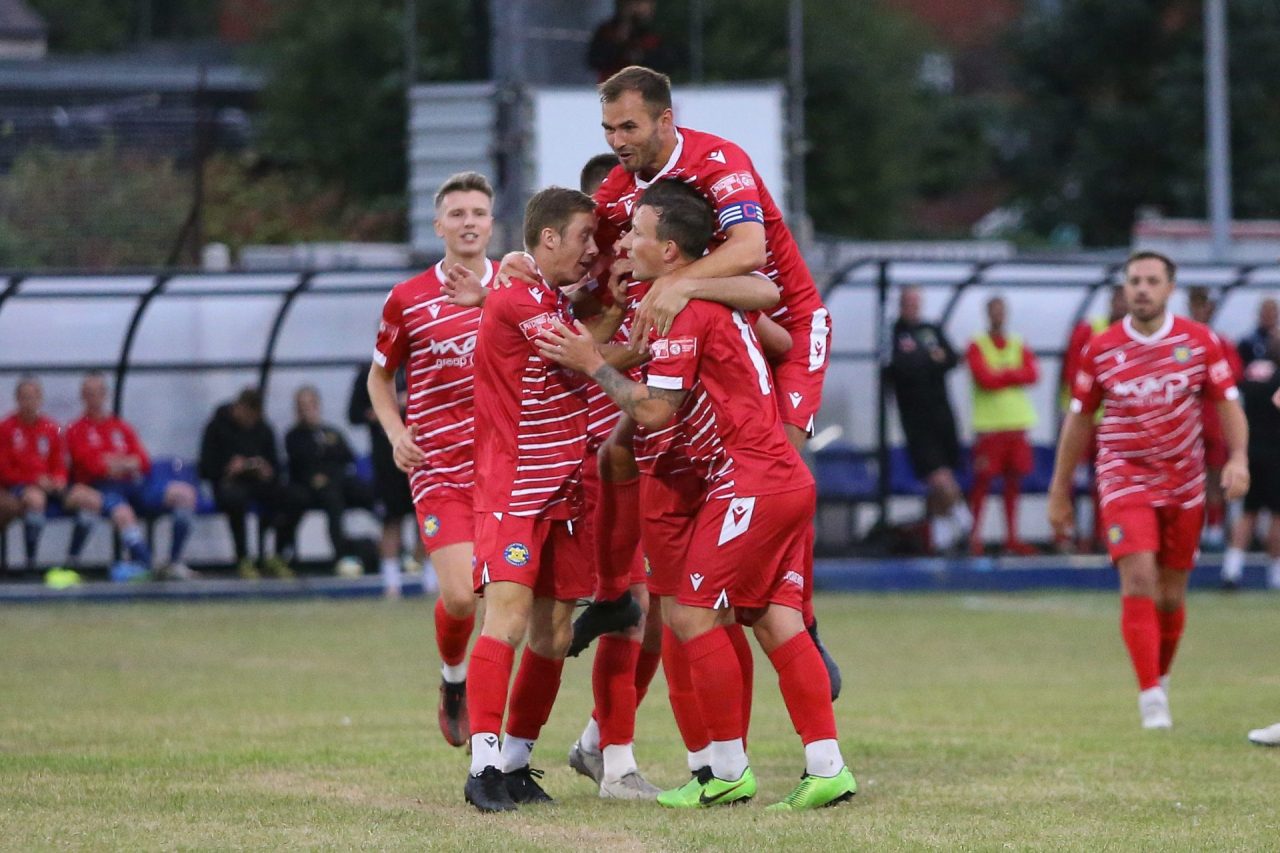 Elliott Beddow scored his first Stockton Town goal as the Anchors earned a hard fought three points on the road at Ossett United in a feisty affair at Ingfield Stadium.

Elliott Beddow gave the Anchors an early lead with his first goal in Stockton colours with a well taken finish, with Nathan Mulligan curling a shot into the far corner to double the visitors advantage.

Mikey Roberts added a third early in the second-half as torrential rain descended on West Yorkshire, and the Anchors saw the game through to move top of the Northern Premier League East Divison, albeit after just two games.

Michael Dunwell made four changes to the side which defeated Worksop Town on Saturday, with Lewis McDonald, Cameron Painter, Roberts and Beddow entering the starting line-up.

It was the Anchors no.9 for the evening who had the first effort on target in the game, Stephen Thompson headed N. Mulligan’s cross back across goal to Beddow who’s shot was savde by Edd Hall.

Beddow got his goal after just nine minutes, the striker with an excellent touch to dig out a loose ball and bury his effort into the bottom corner.

The Anchors continued on the front foot and after Stephen Thompson headed wide from Mulligan’s cross, Beddow was denied a penalty shout after being dragged down in the box.

Thompson fired a strike over the bar before Roberts also sent an effort over the upright as Stockton continued to pressure the Ossett backline.

The game turned in a feisty affair as tensions threatened to boil over in West Yorkshire, Kev Hayes was brought down with a free run at goal, with no card given to Michael Hollingsworth. Off the ball, Adam Nicholson was struck by Craig Nelthorpe but he was only shown a yellow card.

Just minutes later, Oliver Fearon was booked for bringing down Mulligan, with the away side unhappy at the conduct of the hosts.

Beddow charged down Hall as he contemplated on the ball but the deflection agonisingly ran away from the Anchors forward.

McDonald was called into action for the first time in saving Fearon’s close range header before Stockton doubled their lead in stunning fashion.

Hayes did incredibly well to keep the ball in a crowd of bodies before sending Beddow down the right hand side who blitzed past the Ossett full-back with a stunning turn of pace, his cross was headed back to Mulligan who curled in a masterful effort into the far corner.

McDonald then pulled off a fantastic double save to first deny Ify Ofoegbu then Joe Stacey on the stroke of half-time.

Nelthorpe, who was fortunate not to be booked earlier in the contest, was finally booked for a foul on Beddow and was subsequently substituted at half-time.

Fearon struck the woodwork early on in the second-half just before the Anchors all but wrapped up the three points through M. Roberts’ first goal of the campaign.

With Ossett chasing a goal to get back into the contest, Stockton exploited the space in behind the hosts defence and Thompson was set away, who cut back across the face of goal for Roberts to take and down and finish into the bottom corner.

The tensions continued to simmer as Hollingsworth, who escaped a booking in the first-half, scythed down Beddow and received only a yellow card.

Thompson was denied what looked to be a certain penalty shout in the final five minutes as the Anchors continued to press forward in the latter stages.

It was a professional performance from Stockton, and our attention now turns to Saturday’s Emirates FA Cup tie against Pontefract Collieries.