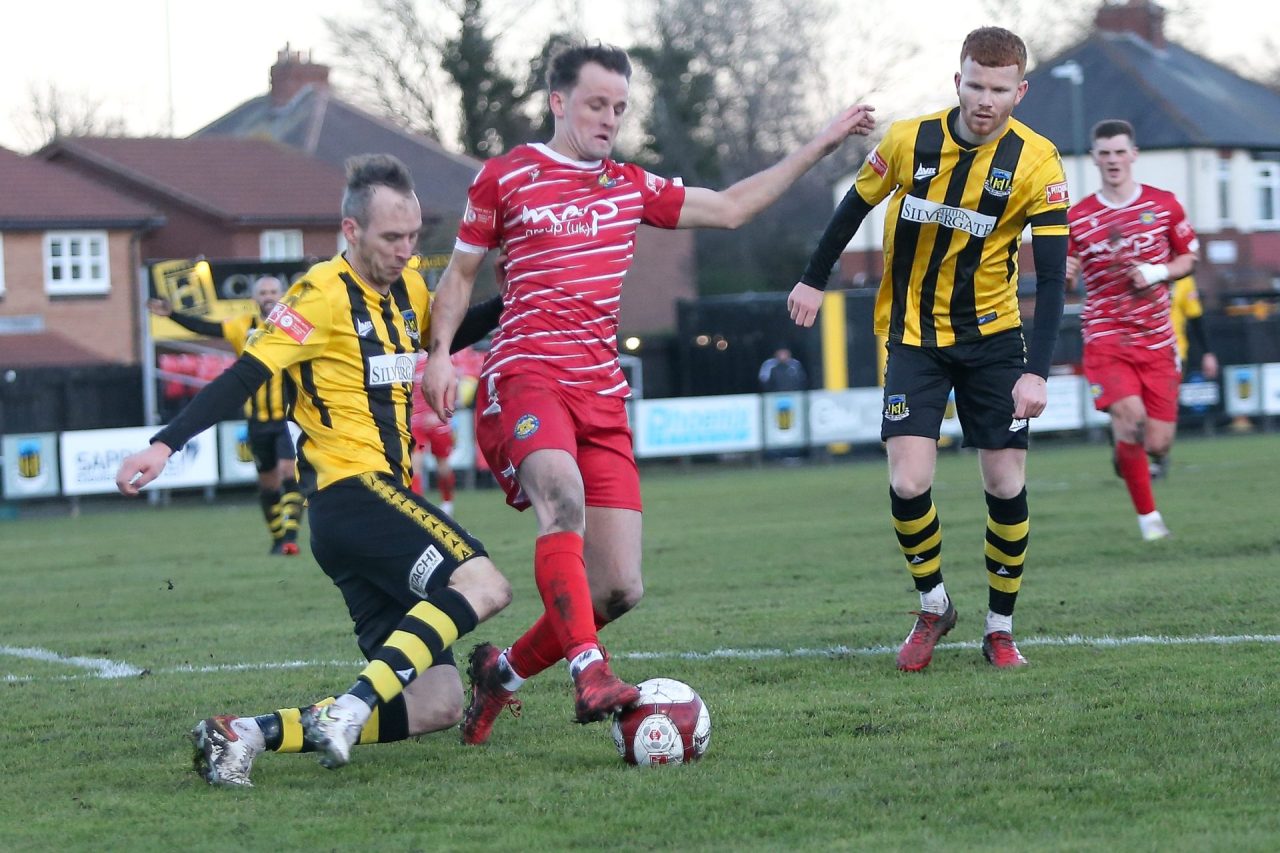 Stockton Town were unable to make use of the wet and windy conditions as they lost 2-0 at Hebburn Town.

Hebburn were ahead in the first seven minutes when AmarPurewal headed in, then an emphatic effort from Joe Walton doubled the Hornets lead 10 minutes later.

Adam Nicholson was shown a red card for the Anchors in a game where six yellow cards were shown.

Michael Dunwell made three changes going into the game, with Elliott Beddow coming in for Sam Hodgson, Louie Hall in for Tom Coulthard, who was unavailable, and Cameron Painter replacing the suspended Stephen Thompson.

Before Stockton could get to grips with the conditions, Hebburn were ahead seven minutes in, when a cross from the left was guided in nicely by the head of AmarPurewal.

Louie Hall had a chance to equalise moments later when a ball bobbled around the box, but the defender couldn’t get enough contact on it to beat Shaun Newbrook in the Hebburn goal.

After 17 minutes, Hebburn doubled their lead through a moment of madness. Stockton looked like they’d nullified a Hebburn counter attack until Joe Walton fired from the half-way line which caught Lewis McDonald off guard and went in.

The Anchors pressed to get back into the game and had a great chance to do so when Lewis King found space in the area and had a shot on goal deflected narrowly wide.

On the stroke of half time, Elliott Beddow was played through one on one nicely but the surface played its part and made his effort awkwardly trickle into the goalkeepers hands, and the sides went into the break with the hosts holding a two goal lead.

Stockton came out the better team in the second half, with Kevin Hayes and Glen Butterworth both having great strikes, putting Newbrook to the test.

However in the 67th minute, Adam Nicholson was shown a second yellow card, only a few minutes after receiving his first, after fouling the Hebburn winger just outside the area.

The momentum dropped after that and the game quietened out towards the end, Stockton had a few opportunities but nothing that Shaun Newbrook had to be worried about.

The game finished 2-0 to the hosts to help them close the gap to Stockton in that 2nd place position.

The Anchors are back at home next week to face the playoff-pushing Pontefract Collieries in another massive game.