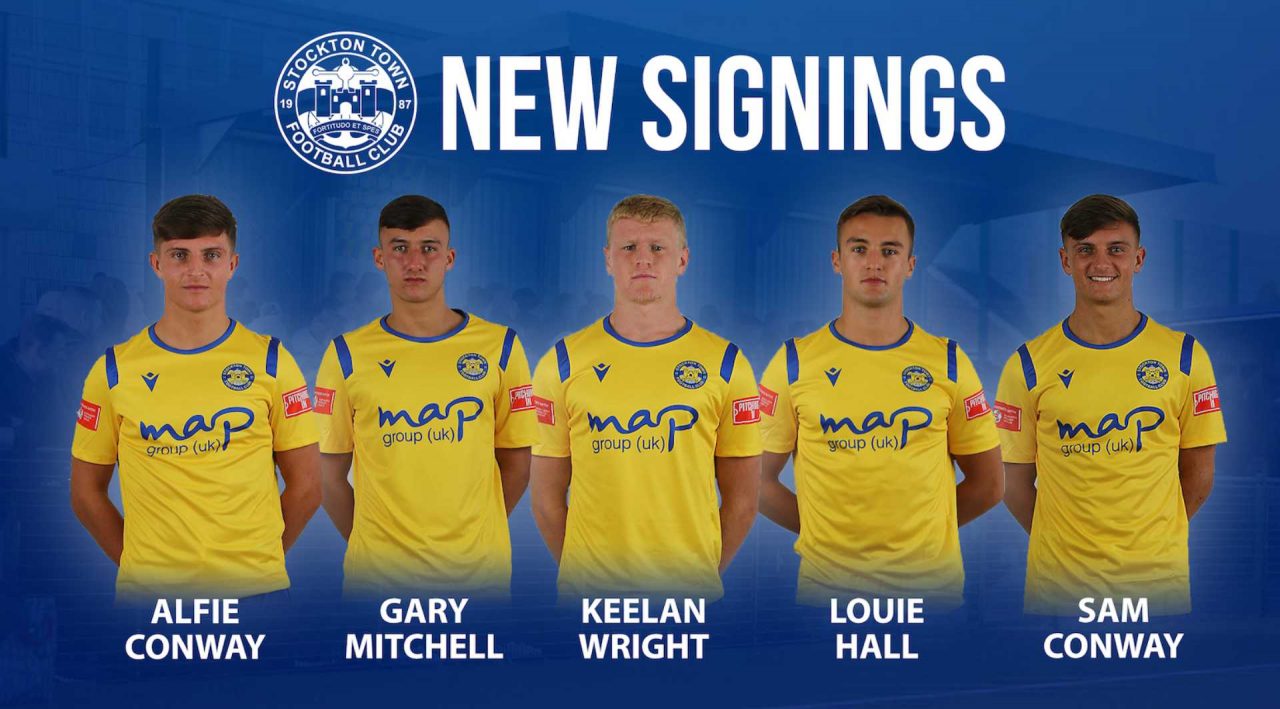 Stockton Town Football Club are delighted to announce five of the club’s Under-18 players have signed with the first team.

The five youngsters featured throughout pre-season and have fitted into the first-team squad well, and Anchors manager Dunwell believes they were all ready for the “step up”.

“We felt these lads were ready to step up to the first team”, said Dunwell.

“From watching these lads in U18 games and reports from Liam [Cox], between us we felt they were ready to move up.

“They’ve come in to training and pre-season games and they’ve slotted right in with the group, they’ve gone into senior games and not looked out of place.

“We signed them because we believe in our junior teams, we want our juniors to see the visible pathway to the first team and want to play for Stockton Town rather than elsewhere.

“Adam Nicholson, Tom Coulthard, Kev Hayes all came through the junior sides and are now stalwarts of the first team.

“Tom Portas, Shane Henry, Dan McWilliams all played through the junior sides, had careers elsewhere and came back.”

The Anchors begin their first ever campaign in the Northern Premier League when they travel Stocksbridge Park Steels on Saturday 14 August.

Ahead of a historic season for the club, the manager believes the energy brought to the team by the U18s will help the club going forward.

Dunwell said: “They’ve brought a lot of energy and freshness to the squad. The experienced first team players have been a little surprised by how well they’ve adapted.

“What is positive is the players trust them, not only in training but in games as well.

“They won’t play week-in, week-out as we’ve explained to them, but there’ll be three or four in the matchday squad on Saturday against Stocksbridge.”

Forwards Gary Mitchell and Sam Conway have both been on the scoresheet in pre-season, and Dunwell is impressed with how seamless the players have made the transition to the first team squad.

He said: “They’ve gone into games and impressed, Alfie Conway, who’s only 16, came on against Morpeth Town for half an hour and never looked out of place.

“Sam Conway’s had good spells and played a lot of minutes, Louie Hall’s slotted in well at the back and Gary Mitchell has scored goals this pre-season.

“Hopefully this shows we’re a club that give our juniors a chance.”