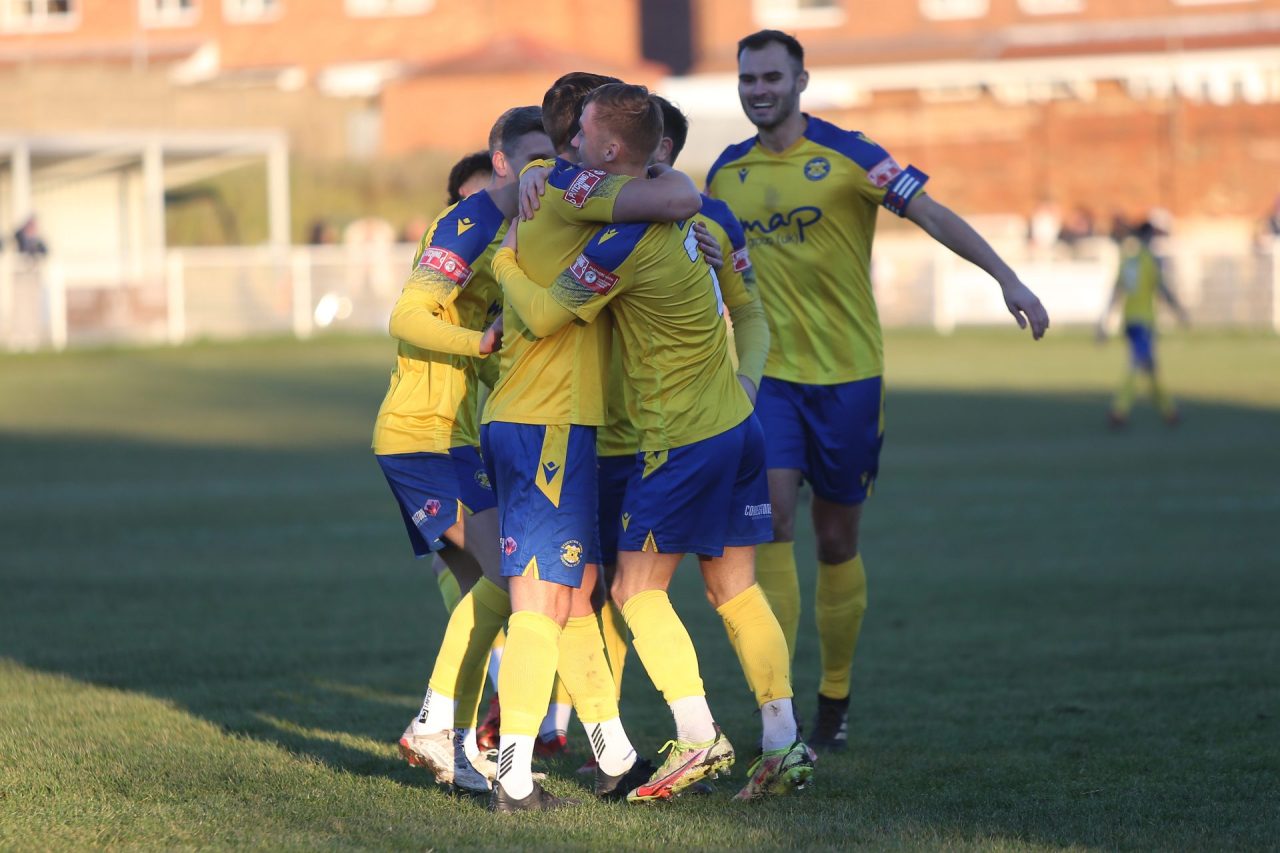 Stockton Town returned to winning ways after a five game drought, with a dominant win at local rivals Shildon.

The Anchors were ahead within 90 seconds when Kevin Hayes drilled a low shot into the bottom corner.

Michael Dunwell’s side doubled their lead after 19 minutes, when Sam Hodgson scored his first Anchors goal after brilliant work from Lewis King.

Stockton finished the game off in the 70th minute, when Liam Cooke got a well deserved goal after a moment of magic from Kevin Hayes on the wing.

Michael Dunwell made one change to the side that lost 2-1 to Consett last week, with Nathan Mulligan coming in for Tom Portas, who was unavailable for the affair.

Before kick off, both sides took part in a minutes applause for footballing legend Pelé, who unfortunately passed away last week aged 82.

The game kicked off and after only 90 seconds, Stockton took the lead when a blocked effort from Stephen Thompson fell to Kevin Hayes, who cut inside and fired a low shot past Harrison Bond to give the Anchors an early advantage.

Stockton were on top early, but the defence had to be alert to a few big Shildon opportunities, with Tom Coulthard and Lewis King both making vital challenges inside the box to keep the lead for the Anchors.

The defensive efforts were soon rewarded when, in the 19th minute, Lewis King received the ball near the half-way line and rapidly drove down the wing, eventually finding himself through on goal where he unselfishly played the pass across the box to recent addition Sam Hodgson who tapped into the empty net for his first Stockton Town goal.

More heroics then took place on the defensive end to keep the two goal cushion, with Lewis King throwing his body in the way to block a goal-bound strike from Joe Posthill.

Sam Hodgson was nearly gifted a second goal just before halftime after a mix up between the Shildon goalkeeper and centre back nearly allowed Hodgson to take it away but Harrison Bond reacted very well to jump onto the ball before Hodgson could get a touch.

The sides went into the half time break with the Anchors holding a convincing 2-0 lead.

Stockton started the second half the brightest, and had many efforts on goal that were met by good saves by Bond in the Shildon net.

Shildon struggled to deal with Kevin Hayes all game long, and Hayes topped off his impressive performance with a moment of magic down the wing, breezing past left back Kurt Matthews and putting an inch perfect ball across the box which Liam Cooke was on hand to finish off a lovely bit of play from the Anchors.

Shildon thought they had a consolation goal in added time after an effort bounced downwards off the bar, but it was judged to have not crossed the line before being gathered by Lewis McDonald.

It was a dominant performance on both ends of the pitch from the Anchors, and they deserved the three points that they took back to Teesside.