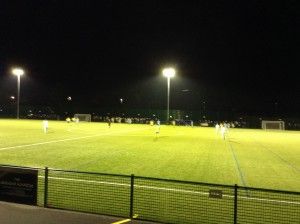 Shot of action in 84th minute.

Stockton Town suffered a 0-3 home defeat to Marske United last night, despite putting in a valiant effort. in front of 415 spectators.

Stockton started the match on front foot but Marske soon found their pace and took the lead on the tenth minute through Michael Roberts. Roberts fired in from close range after opening up the Anchors’ defence.

The rest of the first half saw both sides give it a real go with Stockton unlucky to not level on the half hour mark. Freddie Woodhouse opened up Marske’s defence for Sonni Coleman to tap in but the assistant referee declared it offside.

After that, more chances came and went before half time arrived with the Anchors trailing by a goal but not out of it yet.

Once the second half got underway, both teams were evenly matched till just before the halfway mark.

Entering the 66th minute, Roberts benefitted from neat play to lash in from five yards and net his first brace of the season.

Stockton nearly hit straight back through Owens, whose long shot was tipped over the bar for a corner. Marske cleared the resulting corner and punished it just minutes later.

In the 71st minute, Marske earned a corner of their own and Glen Butterworth thumped the ball home.

That all but settled the match despite both teams still searching for more goals. Things eventually fizzled out before Stockton mounted a late push to little avail.

Despite that defeat, 415 spectators attended on a chilly and showery night outnumbering the 250 last month vs Consett AFC.

Can the Anchors get back on track and emerge victorious in what looks set to be another thriller on Saturday, if last month’s league meeting is anything to go by?