ANCHORS IMPRESS AGAINST THE LAING JACKS 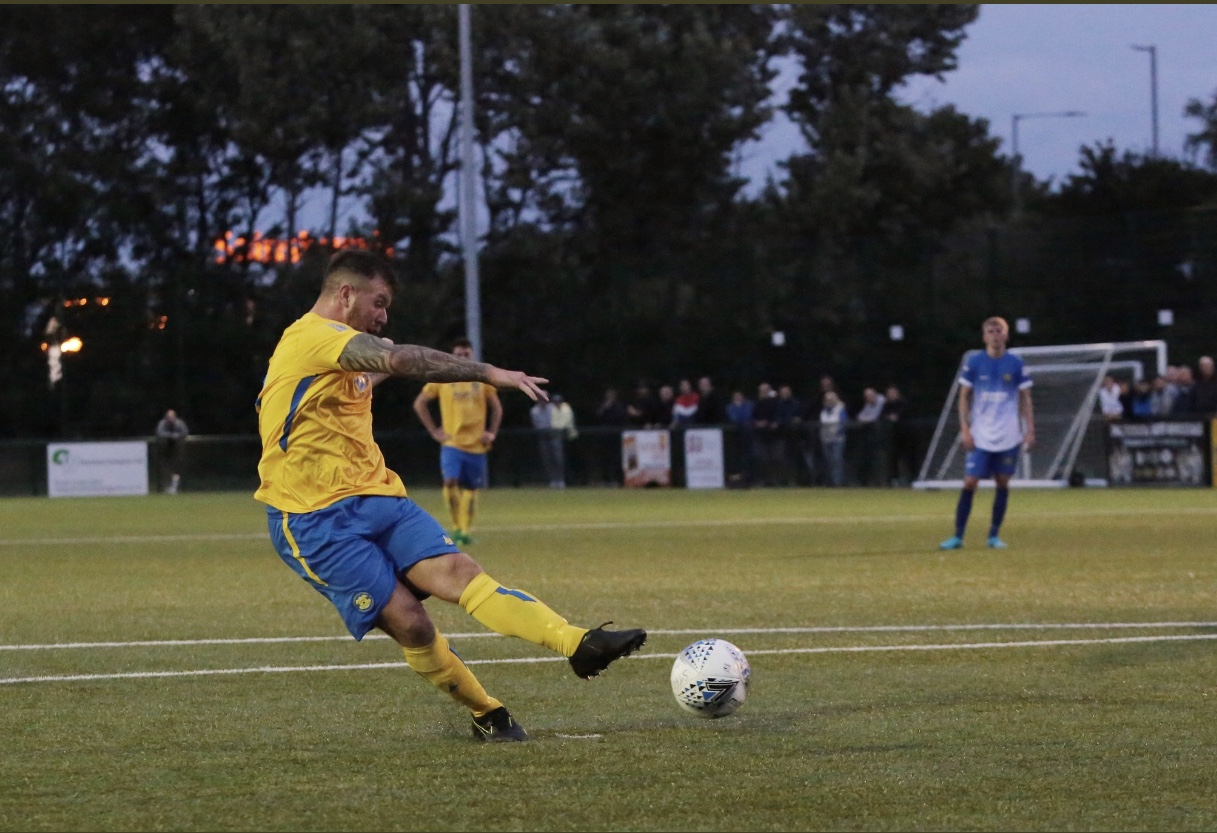 The Anchors continued their unbeaten run tonight with a well deserved victory against a highly rated Whickham FC. They were good value as well, cutting the Whickham defence open constantly, especially second half and were strong and resolute in defence when called upon, restricting Whickham to just 3 shots on target whereas the Laing Jacks keeper Bartlett was working overtime pulling off several saves.

Lewis King was restored to the starting line up along with Jamie Owens as Stockton looked to extend their good form against a talented Whickham side who will be expected to be in the mix for silverware this season.

A crowd of 417 watched an entertaining and exciting game full of quality, pace and aggression. The opening 20 minutes were pretty even Whickham looked well organised and denied space for the Anchors to play in and it was them who had the two best efforts Cowburn clipping the top of the bar with a curling shot and Kelvin Thear had a great chance to score after a slick move involving Bulford and Robson but Callum Roberts saved well low down to his right. In between that Risbrough had got behind the Whickham defence a couple of times only for it to come to nothing. The Anchors began to gain some control of the game and were moving the ball about nicely and the the pace of Risbrough got him into space in range of the goal and this time he worked the keeper with a great strike on the half volley which had Bartlett scrambling to turn it for a corner. Stockton took the lead on 28 minutes when Jamie OWENS crashed home a penalty low into the left hand corner after he was brought down by a lunging Stephen Little as he skipped past him in the box.

The game turned after this and The Anchors pretty much had the upper hand for most of the next 30 minutes, either side of half time, as Whickham went into their shell a little. Kev Hayes effort from Risbroughs cross was just over the bar from 8 yards out, then Tom Portas showed good pace to burst forward and cross to Woodhouse who dragged his shot wide of the post with keeper Bartlett struggling to get across. Stockton finally got the goal their play deserved in the 44th minute as Kev HAYES got his fourth of the season finishing from close range after another flying raid and cross from James Risbrough who was giving Oliver a torrid time. HT 2-0

Any thoughts that the Anchors would sit on this lead were quickly dispelled as they set about the Laing Jacks from the off and carved out several great opportunities but couldn’t quite force it past the brilliant Bartlett who found himself too often staring down the barrel of a Stockton forward with no help in sight.

First it was Risbrough’s reverse pass which set up Woodhouse and his drilled shot was saved well by Bartlett low down to his left. 2 minutes later and Jamie Owens burst past Little and shot across goal, only Fred Woodhouse will know how he didn’t score into an empty net sliding in at the far post and once again last seasons Player of the Year Woodhouse on 58 minutes, stinging the hands of Bartlett from the edge of the box as the Anchors pinned Whickham into their half with Robinson and Portas dominating central midfield.

As the second half progressed Whickham upped their effort and worked very hard but got little change out of a determined Anchors defence, Stocktons centre halves met the physical challenge head on and they pretty much held them at bay and the more they pushed the more times Stockton caught them on the counter. The Anchors pace down the flanks with McWilliams and King dovetailing with the wingers was causing Whickham huge problems and created more openings, Risbrough having two good chances to put the game to bed as he streaked beyond the Laing Jacks backline but Bartlett showed why he is so highly rated making two excellent saves when one on one. Despite all their endeavour, Whickham had just two long range efforts to show both comfortably collected by Callum Roberts and the Anchors managed the game perfectly, as you would expect Whickham pushed them right to the end but it was sub Peter Bulmer who found himself twice in the last 5 minutes played in behind the defence only to find Bartlett in the way again Full Time 2-0

What a great advert for non-league football tonight, quality all over the park and terrific commitment from both sides for 90 minutes. A satisfying 3 points for the Anchors against a very good side in a difficult but entertaining game. Excellent performances all over the pitch and another big crowd to boot, the class of Portas and the sheer work rate and desire to break up play of Robinson in midfield were a feature again. Lewis King ran himself ragged and him and McWilliams with their mobility and obvious quality are fast becoming fans favourites. Jamie Owens was as always a handful for the Laing Jacks backline tonight but ‘Munchie’ Risbrough was the popular decision for man of the match for a scintillating display of pace and movement, full back Kyle Oliver struggled all night to keep up, tbh not many could have, only disappointment for him was being denied the goal his play deserved. Not much rest for Michael Dunwells squad who face a tough 3 days this weekend against Northallerton in the FA Cup then just 42 hours later a difficult Derby game against Thornaby on Bank Holiday Monday.