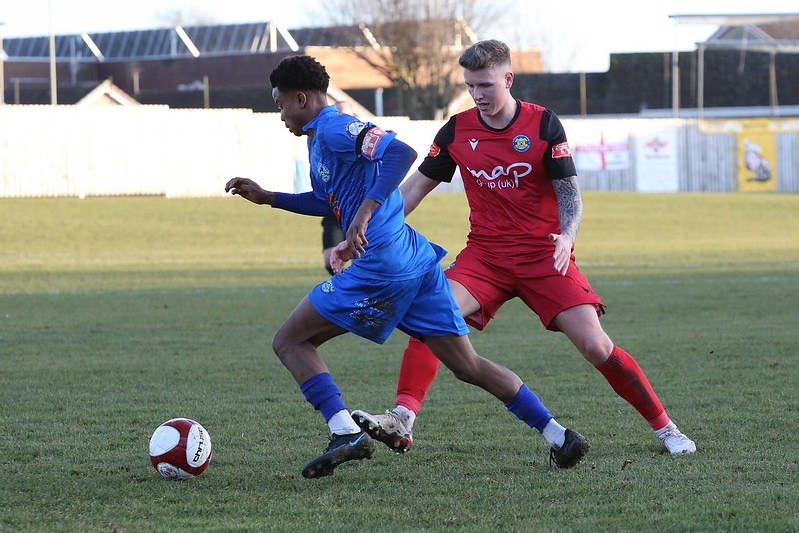 Defender Lewis King admitted Stockton Town are looking to continue their winning run in the league when they travel to Yorkshire Amateur on Saturday.

The Anchors are currently unbeaten in their last 12 games in the Northern Premier League East Division, and extended their winning run to nine games with a 6-0 win at Pickering Town.

King, who signed from Spennymoor Town, is now into his third season with the club and said the team are full of confidence heading into another big game at the weekend.

“We’ve been absolutely flying recently,” King said. “The lads were a bit gutted that the (Liversedge) game was called off because we fancied ourselves.

“That’ll be played in March now and we’ll look forward to the Yorkshire Amateur game this weekend.

“It’s going to be a tough one. They beat Liversedge this season and Shildon, so they’re a good team.

“We’ll be going there full of confidence, though. In the league, we’ve won our last nine games and are unbeaten in 12.

“We’ll be preparing well this week and look forward to the game.”

After the trip to Liversedge in October, the Anchors have turned their form right around and their surge up the table has been widely noted.

Michael Dunwell’s men were sitting 11th with 12 points after nine games played, and are now seven points clear in the top five with 13 games to play.

Full-back King said the turnaround in form comes down to hard work and dedication from every single player.

“It comes down to hard work and belief,” the defender added.

“The hard work was there at the beginning of the season, but things weren’t going our way and we didn’t start as well as we would have liked.

“That came down to having a few disruptions with Covid and injuries. Since we’ve got the squad settled, we’ve really kicked on and shown what we can actually do.”

The race for the play-offs is getting more intense as each week passes by. Stockton are currently sat in fifth, with a game in hand on the two teams above them.

In terms of where their focus is, King admitted the players don’t worry about other teams and continue to focus on themselves.

Talking about the play-offs, King said: “It’s there, and we focus on it, but we don’t like to talk about it too often or worry about other team’s results or anything like that.

“We know what we’re capable of and being in the play-offs come the end of the season is something we strive to achieve.

“We’re looking up now and are focussed on continuing our run in the league.”

The Anchors travel to Yorkshire Amateur on Saturday – 3pm kick-off. Supporters can still book their place on the coach here.