ANCHORS GO THROUGH IN FA VASE 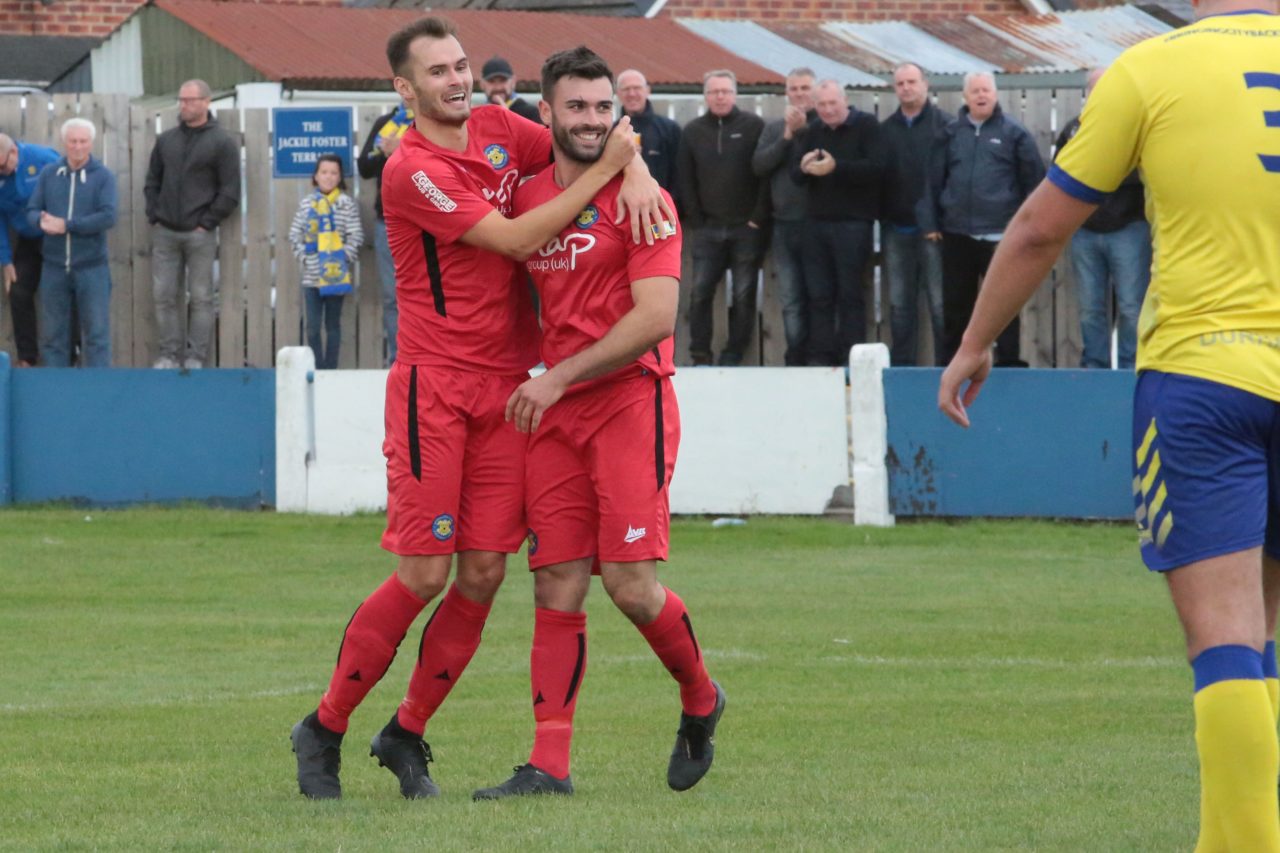 Stockton took on Second Division Durham City today in the Vase Qualifying Round 2 a game that most thought would be a walk in the park for the high flying Teessiders but the reality was a bit of a slog on a poor surface.

Tom Coulthard, Jordan Robinson and Dan McWilliams returned to the starting line up in a game played at Willington AFC ground.

Durham started as if they were going to have a go, they looked bright and aggressive but after a couple of minutes Stockton started to gain some control of the ball, working it side to side to try and open up a gap.

However the bobbly surface made it hard to get any rhythm going and all they had to show in the first 20 minutes was a right foot effort from Risbrough as he cut inside the fullback into the box and shot from 16 yards and soon after Coulthard stepped in a fired in a low shot which Durham keeper Brooks dealt with low down to his right.

Brooks was called into action again on 24 minutes when he made an excellent point blank save from Owens near post header from Craggs corner.

The Anchors were being frustrated as Durham flooded their own box and denied space there were spells when 21 players were in Durham’s half. To make matters worse Jordan Robinson suffered a hamstring strain and was replaced by Nathan Mulligan.

It wasn’t long before MULLIGAN was in the action as he converted a penalty on 39 minutes, Brooks getting a hand to it but the power took it in, after Owens had been fouled as he broke into the box.

The Anchors turned up the heat and Durham looked to be shaken. James Risbroughs run was picked out by Tom Portas with a great lofted pass and he found himself free but his shot from the edge of the box was just wide. Just before half time Nicholson headed over a corner that bounced awkwardly on the uneven surface when he seemed certain to hit the target. HT 1-0

It was Durham who had the first effort in the second half, a mistake allowed Durham to break quickly and find some space with skipper Chapman curling an effort which Roberts collected comfortably.

Nicholson had another effort from a Craggs corner but although he met it well at the near post it flashed the wrong side of the goal.

Two minutes later and Mulligan looked certain to score as he tried to lift a pass over the onrushing Brooks but the keeper stopped the ball with his face. The resulting corner sealed the victory for The Anchors as a deep cross from Craggs found COULTHARD in space and he headed it powerfully past Brooks Saunders on the line swung a foot but it deflected into the roof of the net to make it 2-0 on 62 minutes.

The expected onslaught never really came, not sure how much credit is given to Durham or whether it was Stockton just not having the sharpness today. Either way Durham weren’t going to abandon their game plan and it seemed they were trying to keep the score down more than anything else.

Nathan Muligan linked up well with James Risbrough on 75 minutes and Risbrough burst through the defence into the box but he scuffed the shot as he ball bobbled and the keeper collected it easily, the Anchors just saw it out from there. FT 2-0

Not the best bit of entertainment you’ll ever see but we’re probably being spoilt at the moment and credit to Durham for working very hard today. Pitch wasn’t great bobbly and the wind contributed to the problems as well. Good news is 8 clean sheets in a row and we’re in the hat for the 1st Round proper, bad news is another couple of injuries to take into the next 2 weeks starting with a tough match versus N Shields on Wednesday evening.