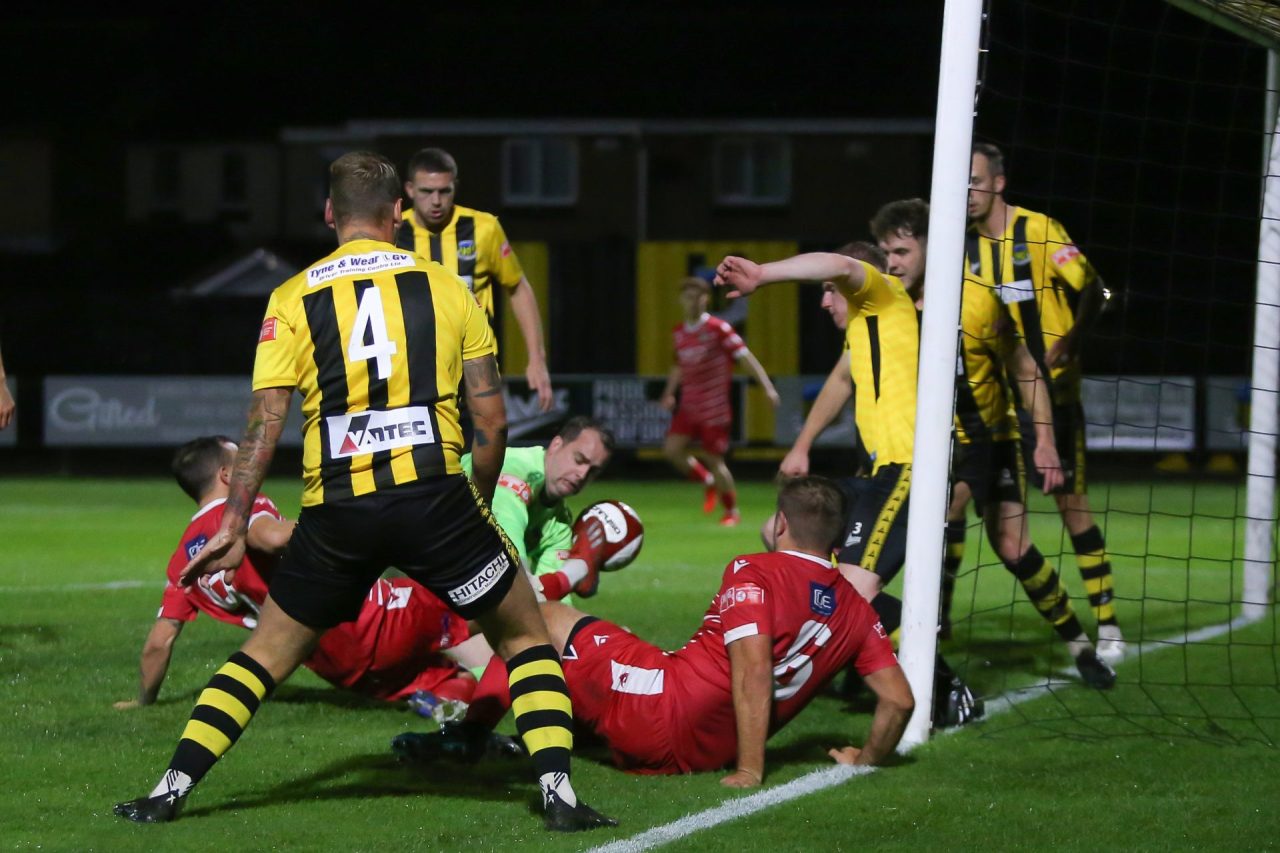 A first half brace from Oliver Martin followed by a goal from Amar Purewal just after the hour mark were enough for the home side to book their place in the next round.

The Anchors left with a consolation when Tyrone O’Neill scored his second for the club.

Stockton came into this one on the back of a 1-0 win over Cleethorpes Town, while Hebburn had beaten Tadcaster Albion 5-3 at home.

It was also just a few weeks since the meeting between the two clubs when Stockton came out as 2-1 winners at the MAP Group UK Stadium.

Stockton started the game strongly and enjoyed the early share of the chances.

They carved the opening chance when Nathan Mulligan’s free-kick was headed at goal by Adam Nicholson before Newbrook punched it away from the Hebburn goal.

In the 12th minute the Anchors hit the crossbar when Kevin Hayes’s cross was met by Mikey Roberts in the six-yard box.

Two minutes later Nicholson again made himself dangerous in the area by heading down a cross from N.Mulligan following a short corner.

Stockton again should have the opener when a quality ball over the top from Stephen Thompson put Liam Cooke through one-on-one. His effort was straight at Newbrook.

Thompson then tried to score himself when he sent a shot in from the edge of the area but Newbrook proved equal again.

Stockton’s domination continued as N.Mulligan got himself down the left before he sent in a cross for M.Roberts who headed narrowly wide.

The Anchors were made to rue those missed chances when Hebburn took the lead against the run of play. Lewis King played the ball back to Callum Roberts who unfortunately slipped as he kicked it which sent it straight into the path of Martin who made no mistake.

Stockton tried to reply when Hayes got the better of the full-back and sent a cross for M.Roberts who could only head at Newbrook.

Hebburn Town then doubled their lead when a cross from the right found its way to Martin who struck it sweetly into the net for his second of the game.

Stockton started the second-half looking for a route back into the game. First a scramble in the Hebburn box saw the ball spill out to Cooke who sent his effort over.

Cooke then tried again with an effort from outside the area which he sent over the bar.

However the game was fading away for Stockton when they conceded a third. Two headed flick-ons saw Purewal played through and he was able to lob the ball over the on-rushing C.Roberts.

Stockton were unable to craft any serious chances until the 89th minute when they scored a consolation. O’Neill was able to head in from a free-kick from the left.

Stockton Town can return their focus to league action when they will be aiming to maintain their 100% record away at Lincoln United.