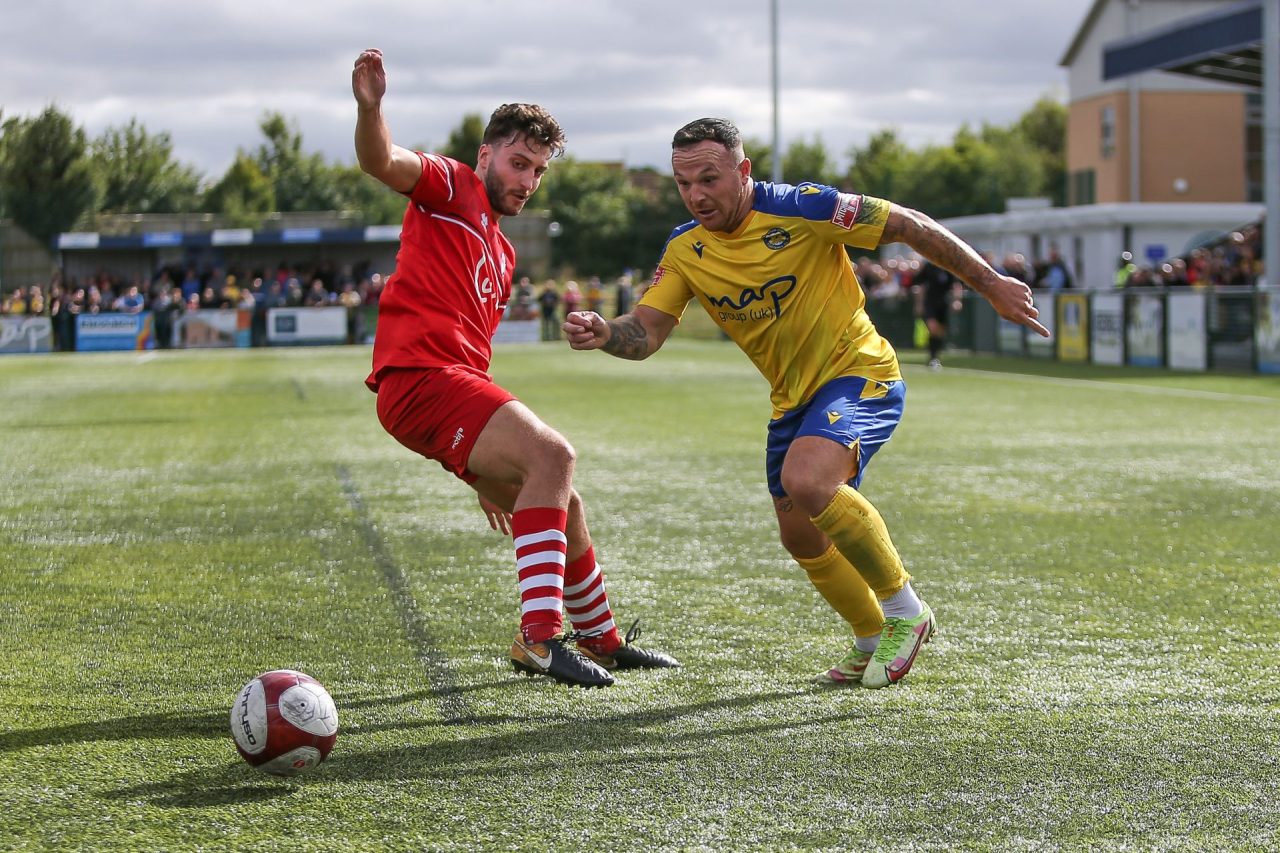 Mikey Roberts scored the winning goal for the second successive game as Stockton Town beat Shildon and maintained their perfect start to the season.

M.Roberts doubled Stockton’s lead early in the second half with a cheeky back heel finish.

Jon Weirs netted via deflection to give Shildon a late lifeline but Stockton held on for the win.

Shildon ended with ten men as Dean Thexton was shown a second yellow for a dive in the box.

Manager Michael Dunwell named an unchanged side from the one that beat Stocksbridge Park Steels with a stoppage time winner on Saturday.

The Anchors had the game’s first chance when M.Roberts was unable to direct his header at goal.

Shildon answered back with David Atkinson firing over the crossbar following a good move.

Stockton started in a positive fashion with Kevin Hayes causing problems for the visiting Railwaymen. A quick break forward was struck wide by the winger.

Then brilliant play from Hayes down the left with Stephen Thompson led to the latter cutting the ball back for Louie Hall who saw his effort deflected and collected by Shildon goalkeeper Matthew Bateman.

Hayes then had effort himself when he cut onto his trademark left but he saw his effort saved by Bateman.

Stockton were rewarded for their strong first half performance when Mulligan took advantage of a half clearance by Bateman with delightful lob which typified the outstanding form the midfielder is in.

Early in the second half, Stockton pressed for a second. Hayes came in from the right and sent an effort whistling by the far post.

Hayes came close again when he beat his man before curling wide.

Coulthard had a great opportunity that he sent towards goal which was scooped away by Bateman.

Nine minutes into the second half Stockton added their second when Hayes’s dangerous low cross was met with a lovely back heel finish from M.Roberts.

Stockton continued to push for further goals as the game wore on. Thompson remained a lively figure firing wide from 25-yards then sending an effort high and wide from just outside the box.

Thompson then was denied by Bateman when he was slipped through by Hayes. Mulligan had the resulting rebound blocked and cleared.

Shildon had the final moments of the game as Stockton tired. Thexton pulled the ball back to Ben Trotter who inexplicably struck the crossbar from close range.

The Railwaymen gave themselves a chance of stealing a point when Weirs found the net with a deflected effort.

However Shildon’s game ended on a sour note when Thexton was shown a second yellow for he tried to win a penalty with a dive.

Stockton’s win means they have taken maximum points in the league. Next up is a nine day break before a home game against North Shields under the lights.