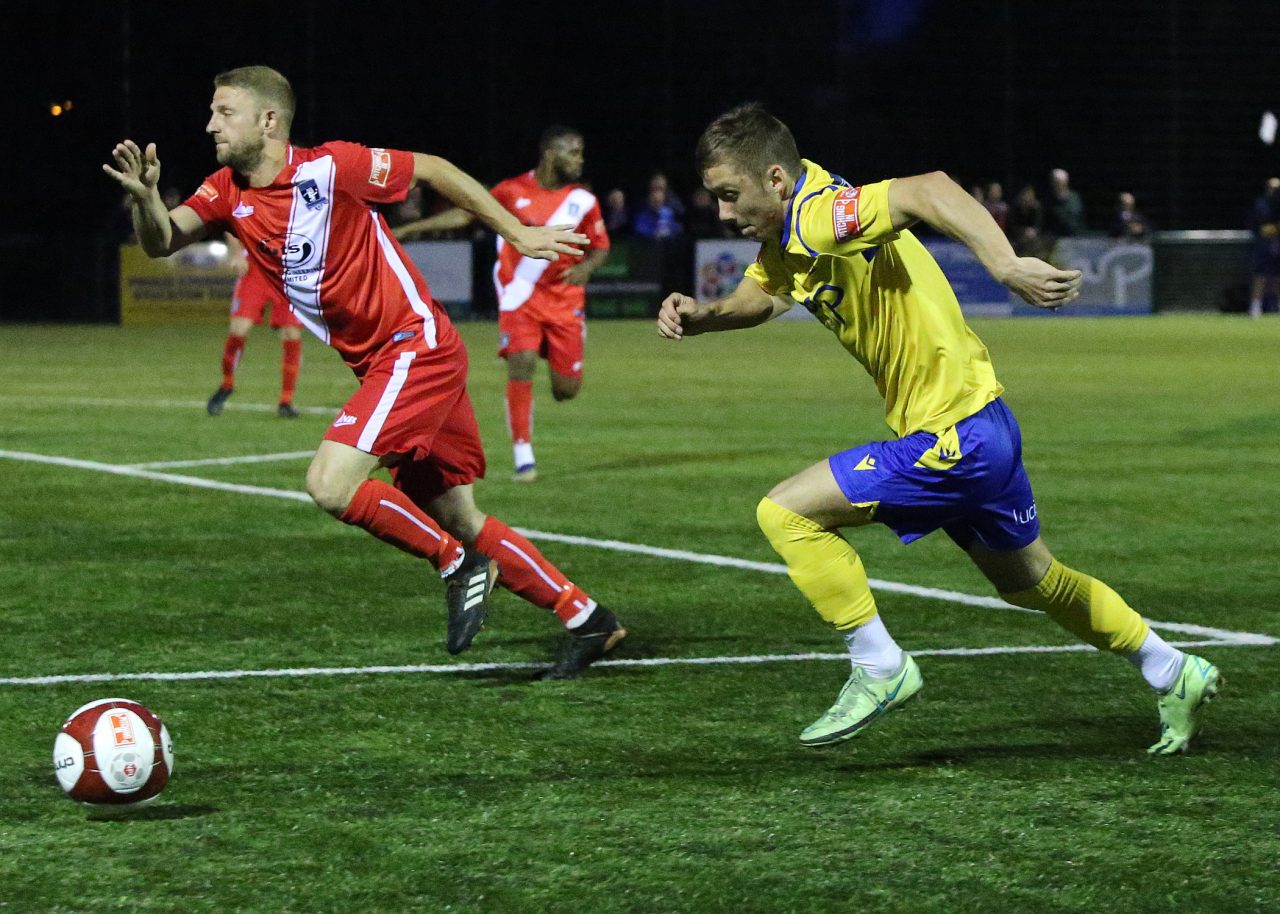 Kev Hayes scored his 50th goal for Stockton Town as the Anchors returned to winning ways with a comfortable 3-0 win over North East rivals Dunston.

Jamie Owens fired the Anchors ahead in the opening stages, latching on a rebound after Nathan Mulligan was denied from close range.

Dan Capewell struck the bar with Dunston’s only clear-cut chance of the first-half, but the hosts responded with a fine second-half display.

The Anchors picked up an important three points, and face a tough test on Saturday as they travel to National League North side Curzon Ashton in the Emirates FA Cup.

Manager Michael Dunwell made three changes to the side that lost to Cleethorpes Town at the weekend, with full-back Dan McWilliams, midfielder Nathan Mulligan and forward Mikey Roberts all starting.

The Anchors settled well and started on the front foot, with the first attack of the game resulting in Kev Hayes picking out Nathan Mulligan, who shot just wide.

It wasn’t long until the home side had the early breakthrough. Mulligan saw both of his headed attempts saved by Dunston ‘keeper Liam Connell, but Owens picked up the rebound and fired into the bottom corner.

After a dominant opening 15 minutes, the game settled, but continued in an open fashion, with the hosts threatening on a few occasions.

With seven minutes to play in the first-half, Dunston went within inches of drawing level with their first real attempt of the half – with the visitors not really posing much of a threat Callum Roberts’ goal.

Phil Turnbull played a free-kick from just inside of his own half into the Stockton penalty area. The ball was half cleared and Dunston centre half Capewell sent an effort crashing into the crossbar.

Capewell connected well with an effort two minutes later, but Shane Henry provided a vital block to prevent the shot heading towards goal.

The Anchors finished the half on the front foot and Owens went close to doubling the advantage. After a clever spin to get past his marker, the striker raced on goal and sent a fierce strike inches wide of the post.

After a tentative start to the second-half, the Anchors started to assert themselves and control the game in the midfield.

Shane Henry’s rasping effort was the first effort of the second period, just after the hour mark, and it the hosts doubled their advantage just three minutes later.

Hayes latched onto a delightful through ball and powered an effort across and into the bottom corner – a strike which hit two milestones. Firstly, the goal was Hayes’ 50th for the club, and also the 1500th in Stockton’s history.

The winger turned provider four minutes later. Hayes’ precise cross from the left side was steered home by the lively N.Mulligan – who was starting his first game of the season for the Anchors.

Dunston went close to pulling a goal back on 74 minutes. A low cross from the left was gathered by Liam Thear, and an audacious back heel went just wide of the post.

The home side continued to look comfortable and saw out the remainder of the game to pick up a huge three points and get back to winning ways.

Anchors out of FA Cup following defeat to Curzon Ashton

Young Anchors to face South Shields after edging past Workington