ANCHORS BEATEN BUT NOT DOWN 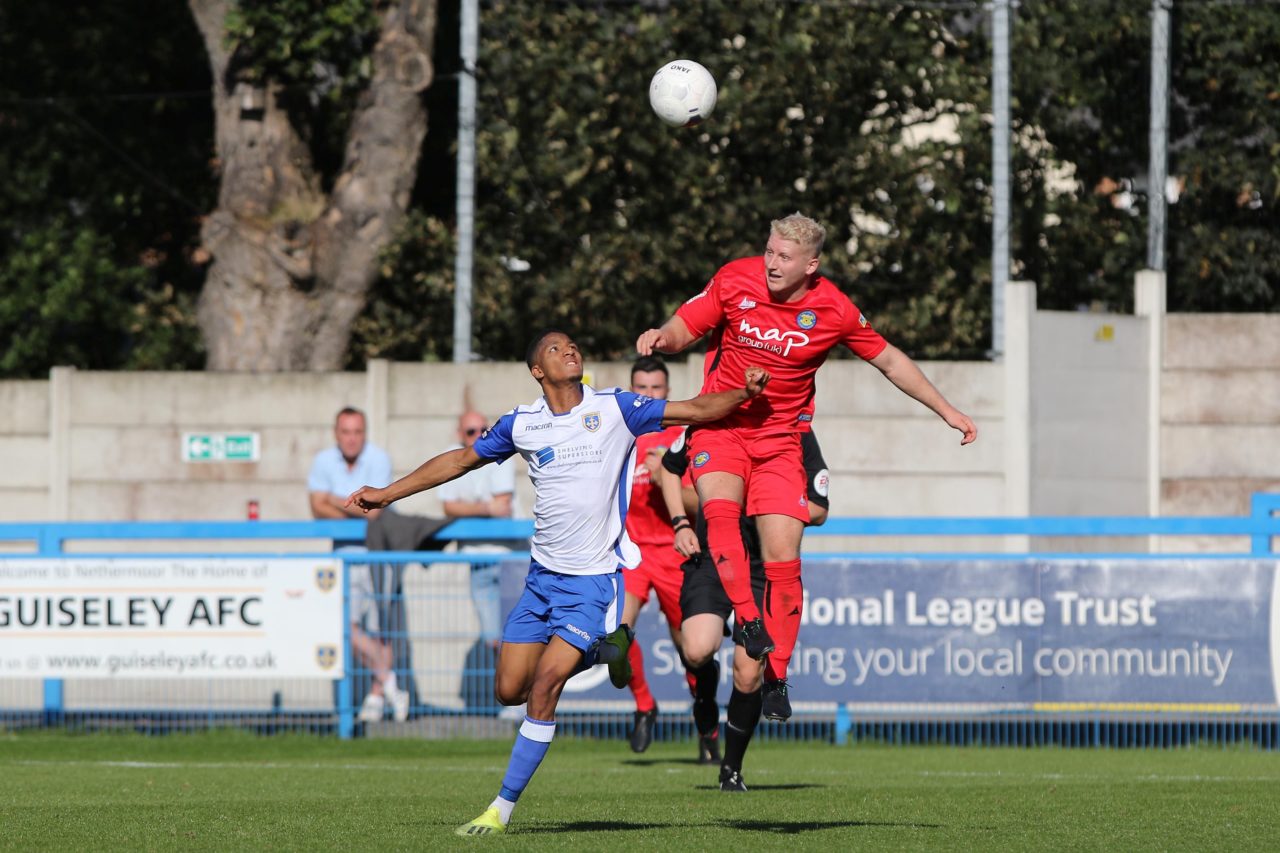 Stockton travelled to National League North side Guiseley in the Emirates FA Cup today and they will not face a stiffer test this season. Unfortunately the unbeaten record has gone but the positives of how they coped with the threat of a team flying high in Step 2 will please the management team.

A huge following travelled down from Teesside and greeted the unchanged Anchors into the warm sunshine and they sang their hearts out for 90 minutes providing brilliant support as always.

Kaine Felix would be a thorn in the side of the Anchors defence all day long and he provided the first moment of concern after just 6 minutes when he was played in and found himself through on goal however he dragged his effort wide, shortly after that Solemans played a clearance back into the box and Johnson shot wide also as Roberts, not for the last time did well, as the Lions started to press Stockton back.

The Anchors when they did break out looked like they could cause problems for Guiseley’s back line and King and Craggs linked up to set Hayes free, his low cross flew across the box but evaded everyone, when the slightest touch would have caused a problem for keeper Dewhurst, Risbrough recycled it and it came back in from King and Risbrough got on the end of it but couldn’t get a clean header in.

Callum Roberts had an unfortunate end to his Wednesday night, but today he showed his class, starting on 20 minutes by rushing off his line and making a smart save with his feet from Aaron Martin, as he was put through one on one by Johnson.

Understandably the Step 2 side were the aggressors and Felix and Soleman were causing problems with their movement. A series of free kicks and long throw ins into a packed area were defended well by the Anchors with the only real scare when Soleman latched onto a loose ball but his goal bound half volley was well blocked by Coulthard.

Guiseley huffed and puffed but despite drawing lots of free kicks from a fussy ref they couldn’t manage a decent effort on target. The Anchors started to find their feet and Hayes and Risbrough looked like the key to creating any opportunities.

Half time came and it was Guiseley and their fans who looked concerned with a 0-0 scoreline and the impending threat of Stockton’s forwards.

The Anchors started the second half brightly but an attack that broke down close to goal left them short in defence as Guiseley quickly worked it to the lively Felix on the half way line, he turned and set off into the space but was pushed wide, he did well to hang onto the ball and skipped round a couple of defenders and as players arrived in support he pulled the ball back into the box to Martin only for NICHOLSON to divert it past Roberts into his own net on 47 minutes 1-0.

The game opened up after this and started to become a little end to end, Tom Coulthard headed a corner wide and then Jamie Owens weaved his way past two defenders and cracked in a left foot shot but Dewhurst got the slightest touch to divert it into the side netting. The Anchors were having their best spell and Kev Hayes was getting more of the ball, he picked out Craggs running free into the far post and swung in a left footed cross but the midfielder couldn’t quite reach it.

Stocktons defenders were still having to work very hard to keep Guiseley at bay and it was that man Felix again turning and running into the box but McWilliams got back to make a challenge and his attempt to flick it over Roberts was diverted for a corner by the Stockton keeper. Roberts made another super save on 82 minutes at point blank range from Martins shot and the rebound was fired in by Johnson but blocked on the line by Nicholson.

The Anchors were giving as good as they got, battling away all over the pitch and pressing for an equaliser in the draining heat but Guiseley just about managed to smother most of it until Bulmer turned onto his right foot and his shot looked like it was going in until Bencherif headed it away close to the line. An indication of how on edge they were showed when the step 2 side felt it necessary to waste as much of the injury time as they could by the corner flag. FT 1-0

It was a great day for the club, sampling life at Step 2 level and the verdict seemed to be that Stockton Town didn’t look out of place. The fans were brilliant and the players were even better, working very hard in a game where for once they didn’t dominate possession but did show the effort and resilience they will need for the rest of the season.

Huge effort by everyone, the defence was tested to the hilt and they were up to it, chances were limited but the Anchors still fought to the end to grab a lifeline. Callum Roberts was excellent in goal and complemented his back four and edges MoM. Back to the day job and a huge game on Wednesday against Shildon.