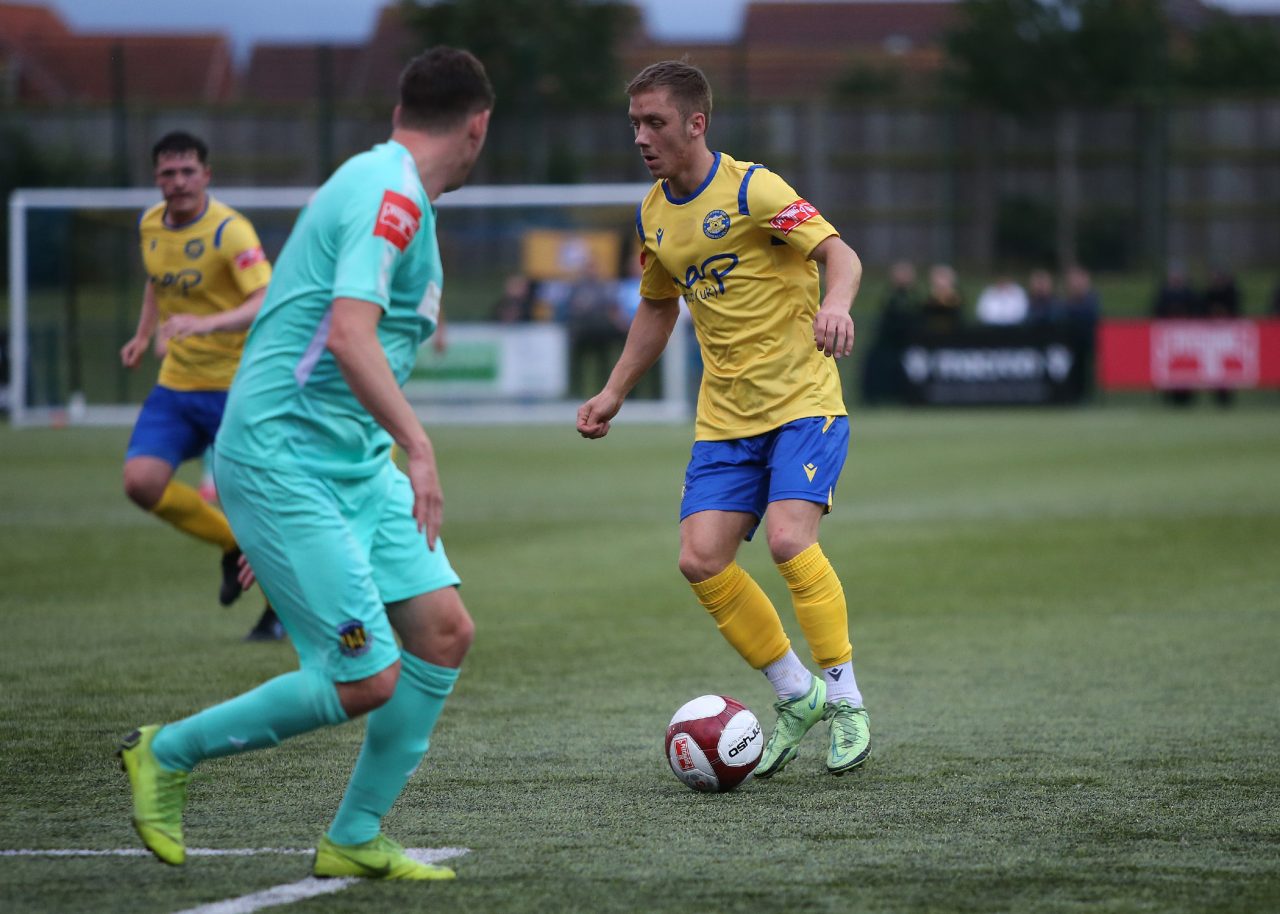 Forward Kev Hayes says the Anchors will be looking to take all three points from their crucial match at play-off rivals Cleethorpes Town on Saturday.

Michael Dunwell’s side travel down to the East Coast sitting in fourth place, just three points behind the third-placed Owls, with eight games remaining of the season.

Stockton sit three points inside the playoffs, with the Anchors set to meet three of their promotion rivals between now and the end of the season, including Saturday’s clash with Cleethorpes.

When the two sides met earlier in the season, Cleethorpes scored three second-half goals to come from behind to beat the Anchors, the only time this campaign Stockton have lost from a leading position.

The 22 year-old admits the Anchors now need to be looking to get three points from every game, but admits Saturday’s fixture will be a “tough game.”

“Looking at it now, the way the table is, we won’t be happy with a point,” Hayes said. “I think we need three points from that game.

“We’ll go into that game knowing we can get three points. We played them earlier in the season and we didn’t play very well against them on the day but still felt we could have got three points, so on Saturday we will be looking to get the win.

“It’s going to be a tough game, long travel, but I’m confident we are capable of going there and picking up three points.”

Last time out, the Anchors were held to a goalless draw at home to title-chasing Liversedge, just the second time in club history that Stockton have been held to a 0-0 draw on home soil.

It was the first time ever Dunwell’s side have seen a goalless draw at The MAP Group UK Stadium, with the previous home stalemate all the way back in November 2011 against Darlington Cleveland Bridge in the Wearside League First Division, 482 games ago.

In picking up a point, Stockton extended their home league unbeaten run to 11 games, an active sequence only beaten by Liversedge themselves in the Northern Premier League East Division.

The two sides were very evenly matched throughout the game, with just seven shots on target allowed in the 90 minutes.

Hayes insists the Anchors are happy with the point picked up on the day, but feels the hosts could have gone on to win the game late on.

He said: “It was a bit of both really [a point gained and two points lost]. “We’re definitely happy with a point but how the game has panned out we could have really pushed for three points but you can’t complain with a point against second in the league.

“The morale is always high. We know if we turn up on the day and our attitude is right that we can beat anyone. We’ve shown that this year when we went to the likes of Marske United and picked up three points.

“When the lads work hard for each other and don’t give up, we know we can win games.

“We pushed on in the second half and we do that in every game, they were a very fit side and I think if the game went on another 10 minutes, we were the only side looking to really get the goal at the end.”

The FA have confirmed the dates for the Step 4 play-offs, with the semi-finals to take place on Tuesday 26th April and the final on Saturday 30th April.

The two playoff finalists will now face as many as five games in just 14 days at the end of the campaign, so home advantage in the playoffs could be crucial in how the season plays out.

However, Hayes is not letting the Anchors get ahead of themselves, insisting concentration lies on the next game only, labelling every match a ‘cup final’.

He said: “It’ll be ideal [to get a play-off game at home] but I don’t think we can dwell on that too much. We don’t want to think ahead of the game on Saturday.

“We need to take each game as it comes now, every game is a cup final from now until the end of the season and we’ll have that mentality that we can win every game.

“If we finish third, it’s a bonus, but wherever we finish, as long as we’re in the play-offs, we take the belief that we can win them.”