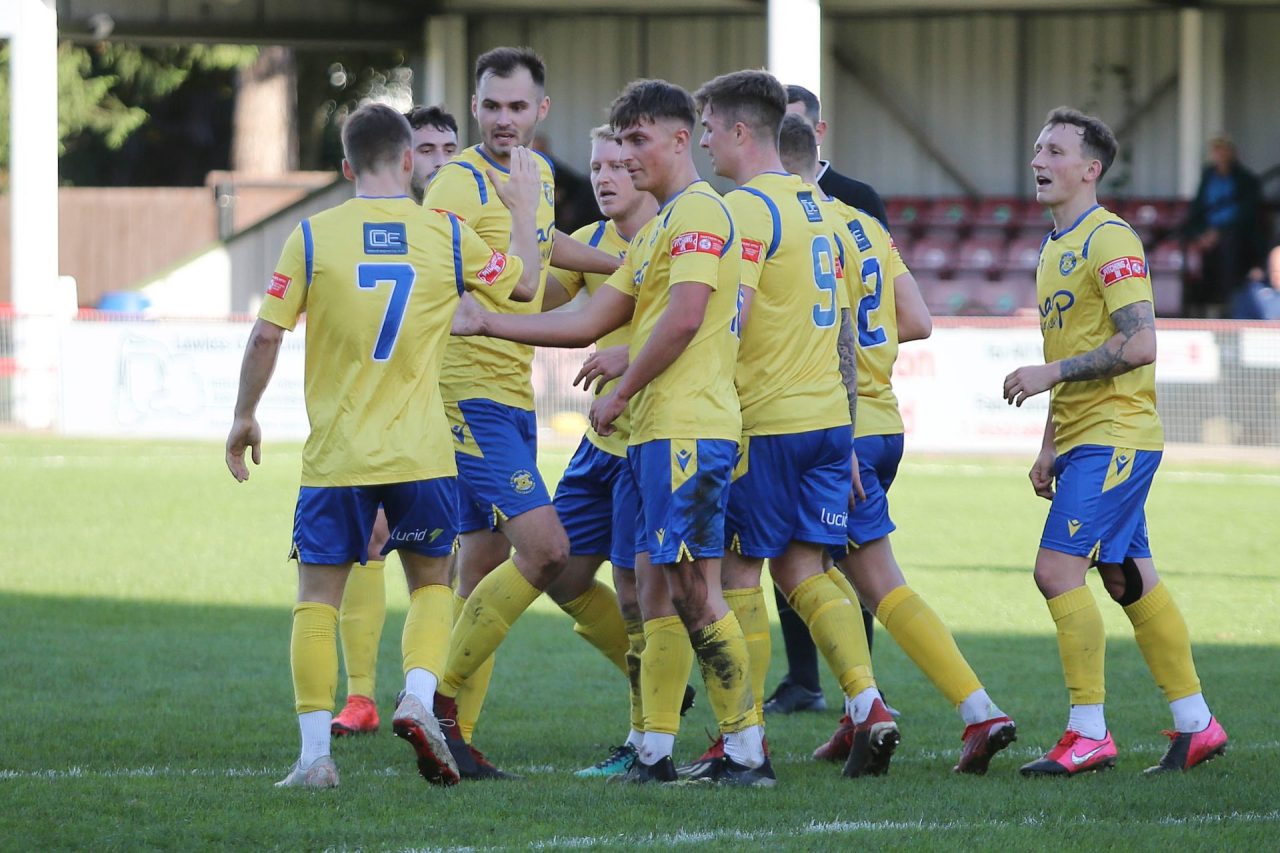 Conway gave the Anchors a deserved half-time lead which rewarded their early superior dominance, with Nathan Steel, Mikey Roberts, Nathan Mulligan and Tom Portas scoring in the second-half to round off a dominant display.

Michael Dunwell named three changes to the side which lost to league-leaders Liversedge last Saturday, with Lewis King, Tom Portas and Nathan Steel brought into the side in place of Louie Hall, Nathan Mulligan and Jamie Owens.

Stockton stamped their authority on the game immediately and could have gone in front inside five minutes, Steel saw a header cleared off the line from A. Conway’s corner, with Adam Nicholson seeing his follow up effort blocked.

Conway was denied his first senior goal with a last ditch block on the line, the 16-year-old rounded James Goff in the Lincoln goal, but his effort was dramatically blocked by Owen Sheriff.

It was one-way traffic for the majority of the first-half, with the Anchors having six efforts inside 10 minutes and 10 shots inside 20 minutes.

Andy Janssen had the hosts’ first real effort on target, striking from 25 yards but Callum Roberts was equal to the shot.

Dan McWilliams threaded a through ball to Mikey Roberts, who cut back for Steel but the striker’s effort was saved well by Goff.

The Anchors continued to dominate proceedings and went close with headers from Adam Nicholson and Shane Henry, before youngster Conway opened his account for Stockton.

Portas, who was excellent in the heart of the midfield with Henry, found Kev Hayes on the right, the winger whipped a cross into the box which Conway swept home into the far corner.

Steel headed wide from Lewis King’s cross, with the right-back then curling over the crossbar and the visitors continued to pile pressure on Lincoln.

M. Roberts almost scored with a stunning volley on the stroke of half-time, Goff with an astounding save to deny the forward.

Stockton’s one goal lead arguably flattered the hosts, but the Anchors were fired a warning shot as Jake Park fired just over the bar with an acrobatic effort inside 60 seconds seconds of the second-half.

Hayes drew a good save from Goff before Steel hit the post when looking to slot in across goal, with Hayes’ follow-up was saved.

Steel got his goal after 52 minutes, King whipped in a cross that wasn’t dealt with by Goff and the striker tapped in at the far post.

Hayes was slipped in by Steel but the winger was denied, N. Mulligan followed up but his effort was blocked on the line and Hayes’ second effort also denied.

Mikey Roberts scored arguably the pick of the goals with a sumptuous finish on the volley, a terrific through ball from Tom Coulthard was latched onto by the striker who finished with aplomb.

Hayes went close again to a deserved goal, his strike went just past the last post before Steel once again saw a shot cleared off the line from some last-ditch defending.

McWilliams set N. Mulligan through with an exquisite through ball, the midfielder gathered the ball and spun away from his man before firing past Goff.

Hayes struck over the crossbar from close range before Tom Portas’ driving effort was saved as the Anchors looked to add more goals.

Portas, who was excellent all game, added the goal his performance deserved with a smartly driven effort into the bottom corner.

The Anchors are next in action next Saturday at home to Yorkshire Amateur, in which the club will be hosting a Remembrance Ceremony.