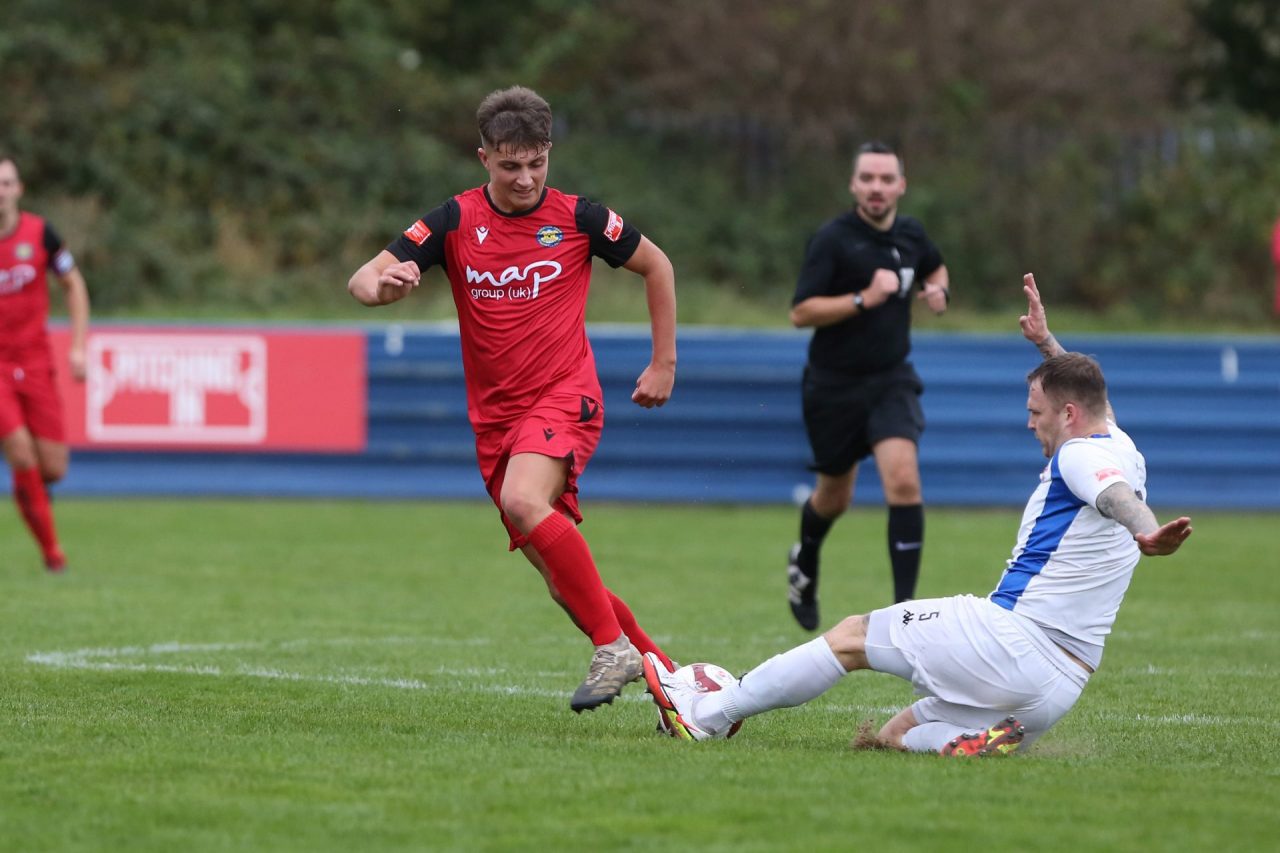 Youngster Alfie Conway admitted he was “buzzing” to get his first senior start for Stockton Town in the game against league-leaders Liversedge.

The 16-year-old, who made the step up to the first team in pre-season, had previously made three appearances off the bench this season – against Hebburn Town, Bridlington Town and Cleethorpes Town.

Conway was handed his first start against Liversedge and went on to play the full 90 minutes – and was also named as man of the match.

Heading into the game, the midfielder admitted there was nerves and excitement ahead of his first start, but he was also feeling confident.

“I was very nervous for it,” he said. “Michael (Dunwell) phoned me on the Friday night and told me I’d be starting.

“I was very happy, but also very nervous at the same time because they were top of the league and I hadn’t started a game before that.

“I went into it feeling confident though, and it all worked out in the end.”

Talking about how the game went, he continued: “It was good. I found it difficult to get started, but as it progressed, I feel that I got a lot more confident on the ball.

“The team helped me and made me feel a lot more confident. It was good to get that first start.

Making the step up to the first team at any level can be a challenge as a young player, but it’s a transition Conway has made with ease and certainly looks at home.

The young midfielder admitted that he’s been trying to impress in training to get his chance in the starting 11.

Conway added: “I’ve been trying to impress in training and just show what I’m capable of.

“I was absolutely buzzing to be told I’d be starting. I didn’t really expect it to be honest. I’ve been working hard in training, and I was getting on the pitch in previous games.

“But to get that first start means a lot and I’m hopeful more will come.”

The 16-year-old has now made four appearances this season, and is hoping to continue to show what he’s about in the Northern Premier League and continue to learn from experienced players.

“I’m hoping to get a lot more game time for the team, show what I’m about and get myself into the starting 11,” Conway said.

“It means a lot playing for Stockton. The standard we’re at is very high in the Northern Premier League.

“At the start of the season, I didn’t really believe I could get close to breaking into the first team.

“Playing with players like Shane Henry and Tom Portas, it just means a lot to me.”

Stockton found themselves two goals behind at half-time against Liversedge, but come out rejuvenated and pulled a goal back through Mikey Roberts.

A hugely controversial decision handed Sedge their third goal and the Anchors responded once again when Kev Hayes fired home with 20 minutes to play.

Conway believes the performance warranted at least a point against the league-leaders.

“I think we deserved at least a point from the game,” he said. “That decision in the second-half, for their third goal, completely ruined the game.

“We came out in the second-half a lot more positive, and a lot more together as a team as well.

“We had a good talk at half-time, and we come out and got that goal straight away, which lifted our spirits even more.”

The Anchors are back on the road this weekend as they travel to face Lincoln United for the first ever meeting between the two sides.