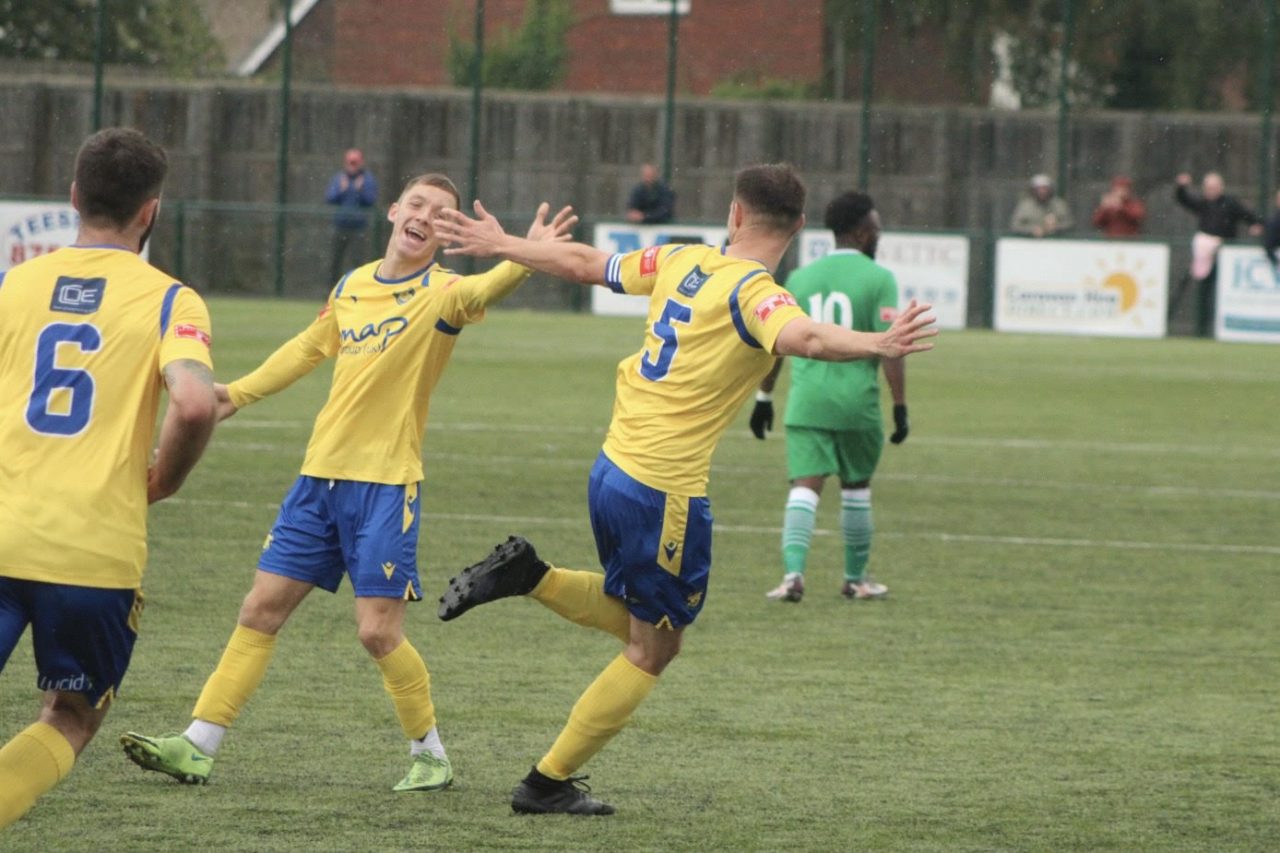 The Anchors captain scored his 97th goal for the club, which cancelled out Brad Wells’ opening goal for the Blues just after the hour mark.

Michael Dunwell made two changes to the side which lost on penalties to City of Liverpool last Saturday, with Jonathan Franks and Nathan Steel coming into the starting line-up in place of Mikey Roberts and Jamie Owens.

The visitors went close to taking a lead inside 10 minutes, Brad Wells struck low across the face of goal which Callum Roberts swooped to palm away at his left-hand side.

Nathan Steel had a great chance to give Stockton the lead just five minutes later, the striker rose to head Jonathan Franks’ cross but his attempt went over the crossbar.

Steel was again involved in the action when he sent a trickling effort goal bound, which Jake Askew tipped onto the post.

There was a moment of contention just after the half-hour mark, Piteu Crouz’s shot was palmed away by C. Roberts into the path of Wells, who looked to round the Stockton goalkeeper and went to ground claiming for a penalty, which was not forthcoming from the referee.

After a quiet first-half, the Anchors looked to pick up the tempo and should have gone in front, Nathan Mulligan with a rare moment of profligacy in front of goal, sending a shot wide from inside the penalty area as the visitors appealed for offside.

Mulligan, just a couple of minutes later, bent a shot that looked to be heading for the top corner, forcing Askew to tip wide and out for a corner. From the set-piece, Shane Henry cushioned a header wide from Mulligan’s delivery.

Frickey took the lead on 64 minutes, neat attacking play between Wells, Crouz and Joseph Stacey set up Wells to slot past Callum Roberts.

Owens and M. Roberts were introduced as Stockton searched for an equalising goal, and were rewarded 11 minutes from time when Nicholson headed home Roberts’ cross for his first goal of the season.

The equaliser spurned the Anchors into life and as Frickley looked to see the game out, went close to netting a winner as Owens’ goalbound shot was dramatically blocked on the line.

Frickley goalkeeper Askew was finally booked for persistent time-wasting two minutes from time, and had to scramble to pour away Dan McWilliams’ goalbound cross.

There was time for one more chance, Franks’ shot was palmed away by Askew, which almost found Kev Hayes for a tap-in.