Stockton travelled to Newton Aycliffe today and looked more like the Anchors of old smashing 5 goals in a performance full of energy and confidence. Last weeks hat trick hero James Risbrough was suspended today and replaced in the starting line up by Chris Stockton.

After playing consecutive games at home, sometimes it takes 10/15mins for the Anchors to get used to a grass surface but today they fired right from the off despite a bobbly tacky pitch. On 4 minutes good work down the right by Bulmer and Hayes worked the ball into the box and Coleman set up in form Fred Woodhouse who totally miscued from about 8 yards out when it seemed easier to score. We didnt have to wait long for the first goal though as Aycliffe struggled to cope with Stocktons movement and it was Kev Hayes who on 7 minutes drifted in from the right and picked a lovely chipped pass to Chris STOCKTON who slammed it home from ten yards 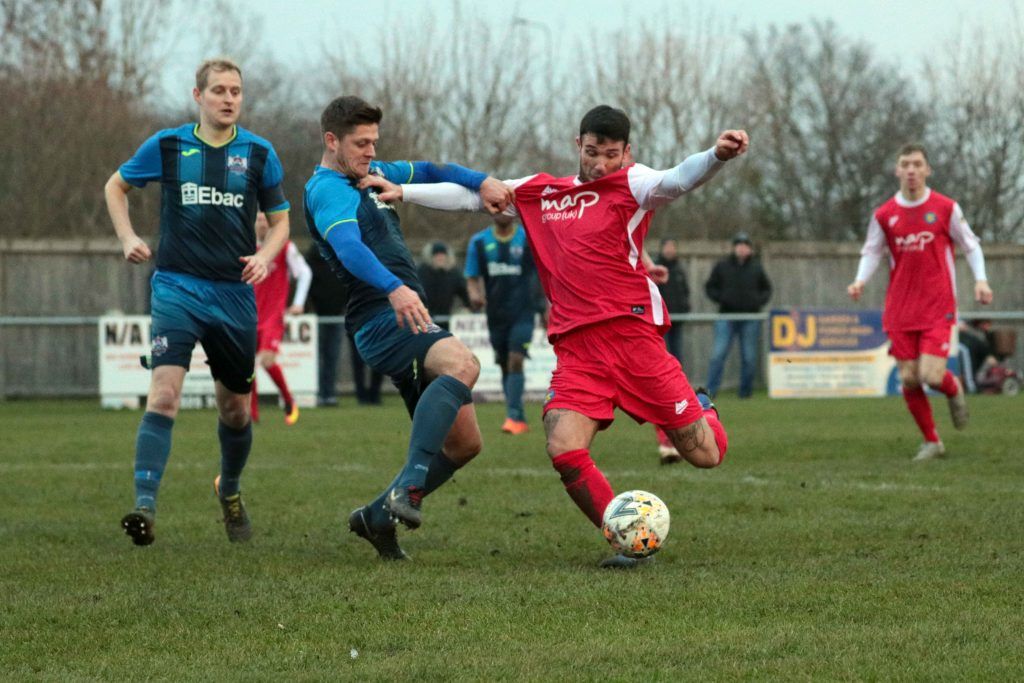 Chris Stockton opens the scoring for the Anchors

The Anchors continued with the upper hand and Sonni Coleman flicked a near post corner from Max Craggs just wide and a minute later Fred Woodhouse made a great run in between the centre halves and got on the end of a good cross from Hayes but headed wide.

Aycliffe then had a short spell which led to a couple of decent chances for them. A long ball from Dinsdale over the top put in Ethan Wood and as the Anchors looked like they’d made a hash of defending it Josh Moody made amends with a great stop with his feet from Wood, as the ball rebounded, striker Matthews sniffed an equaliser with an open goal but Jordan Robinson made a fantastic last ditch challenge to nick the ball off his toe in what was a significant moment in the game.The resulting corner saw the Anchors break and Woodhouse set Stockton away and he raced past the Aycliffe defence but as he tried to slip it past Poskett when he went to ground the keeper made a nice save with his trailing hand to keep the score 1-0.

Aycliffe were resorting to niggly fouls to contain Stockton and it was a lottery if the fussy Ref gave a free kick or not. This time as Hayes skipped inside and was tripped he did blow his whistle and from the edge of the box Max CRAGGS produced a stunner on 38 minutes curling it around the wall with Poskett only able to watch as it bulged the net. 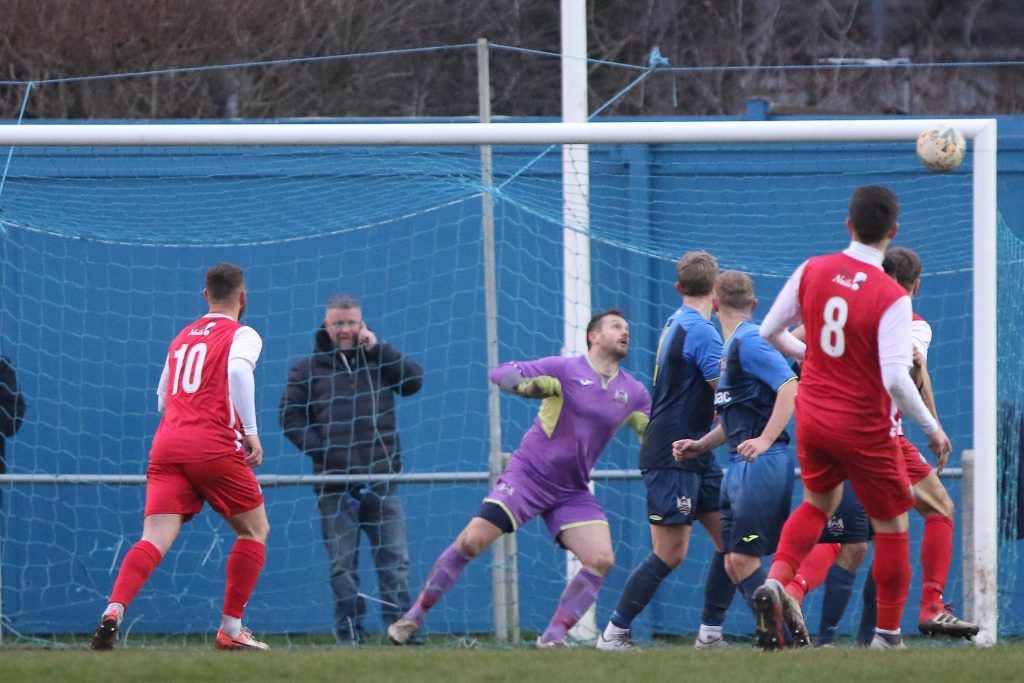 The unlucky Woodhouse had a further chance to score just before half time but fell foul to a bobble and skied his shot over from just inside the box after Sonni Coleman had done well to roll him in after drawing the defence out and following a break down the left where he luckily avoided a reckless scything challenge from Rodgers. Half Time 0-2

Newton Aycliffe started the second half the livelier and put the Anchors to the test, the next goal would be important and after some frantic defending it was produced by the skipper Adam NICHOLSON who outmuscled his marker and headed home another excellent delivery from Max CRAGGS on 52 minutes. 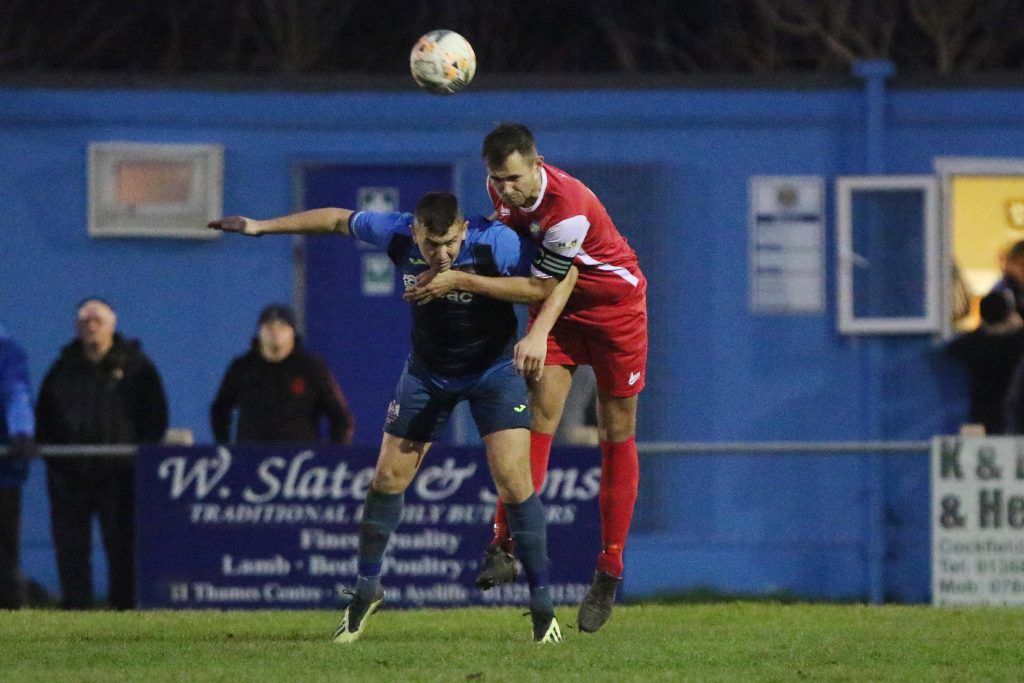 Game over we all thought, but to their credit Aycliffe didn’t and they kept trying, competing unfairly at times, but did make the Anchors defend more than they wanted to. After an innocuous looking cross was partly cleared the ball looped to METZ who from a very tight angle produced a brilliant finish as he lashed a volley into the roof of the net to give them the lift they needed and they pressed the Anchors hard, most of the quality on show from the impressive pace of Metz on the right wing but still their effort brought the best out of Robinson and Nicholson who were both excellent again. Keeper Josh Moody calmed everyone by coming out on several occasions and confidently collecting crosses to help the situation. 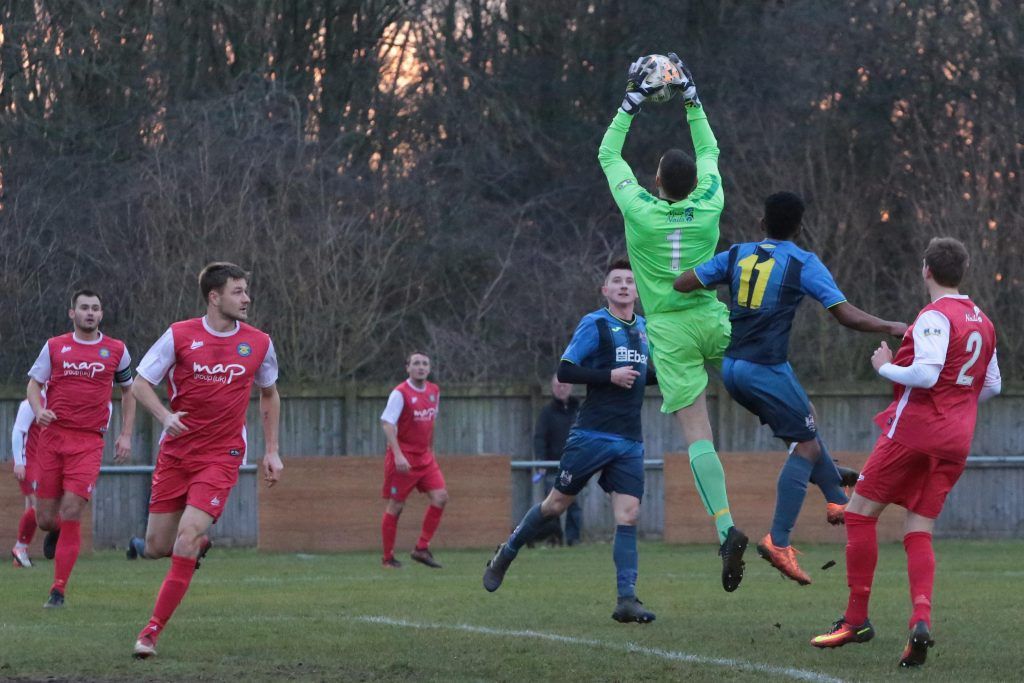 The Anchors regained some control and after Coleman beat the keeper to the ball as he raced out of his box, his cross to Hayes couldn’t be converted as defenders scrambled back to cover the open goal.

On 82 minutes the game was finally put to bed after yet another Aycliffe foul and it was Max CRAGGS who marked his return to top form with a stunning 25 yard free kick into the top right hand corner leaving Poskett grabbing at fresh air.

Aycliffe wouldn’t lay down and a minute later Ethan Wood produced a good low strike from a free kick which Josh Moody got his fingertips to and capped a fine performance from him.

The Anchors had one more effort in them though in injury time and Sonni Coleman got the goal his work and effort deserved when him and Nathan Mulligan interchanged passes and carved out a shooting chance which COLEMAN buried low down across the keeper. Full Time 5-1

A perfect start to the new year for the Anchors, a good strong team performance with several excellent individual displays and hope that a run can be started now to climb back up the League where we want to be. Most pleasing was the return to top form of Max Craggs whose dead balls have been such an important part of the clubs progress on the pitch in recent years. Seeds of improvement seen in the last couple of games flowered today with two fantastic free kicks that led to direct goals and another great ball in for the 3rd goal. UTA