Stockton Town had plenty of chances to make a splash in the Tyne and Wear rain but were made to rue missed opportunities as they had to settle for a 1-1 draw away to a Ryhope CW.

The Anchors led for large parts of proceedings through a Fred Woodhouse goal midway through the first half and they had several chances to extend the lead. Their inability to find a second meant Jack Devlin’s second half leveller was enough to earn the home side a share of the spoils.

It could have been as different story had Stockton taken one of a number of promising second half openings or if appeals for a late penalty were not waved away by the officials but ultimately, Michael Dunwell’s side were forced to head back down the A19 with one point rather than three.

Stockton were looking to continue a promising run of form, which has seen them earn eight wins from ten games since the turn of the year, and they started brightly again. The Anchors had the ball in the net inside two minutes when James Risbrough bundled Max Craggs’ corner into the net but the referee came to Ryhope’s rescue, adjudging there to have been a foul in the build up.

James Risbrough had the ball in the net early but the referee ruled out his effort.

The Anchors had started encouragingly and they would go close again on twelve minutes. Tom Coulthard stepped out of defence in possession and burst through the middle of the pitch. He slid a perfectly weighted ball through to Chris Stockton and the winger pulled an excellent ball back from the byline. The cross found Sonni Coleman who headed his effort down into the sodden turf but straight at Joe Atkinson in the home goal.

The chance seemed to rouse the home side from an early slumber and got them going in the contest. With Josh Moody still unable to shake off the knock he picked up in the victory against Bishop Auckland last weekend, Michael Arthur was between the posts for Stockton and he needed to be at his best to keep his side level. Robbie Bird cut in from the right and squared to Devlin in the middle. He made a strong connection with his strike but Arthur reacted well to repel the danger at point blank range.

The deadlock was broken on 23 minutes and it would be Stockton that hit the front with a sensational team goal. Chris Stockton nodded a deep pass into the path of Pete Bulmer down the right and he sent a low cross into the area. The cross was met by Woodhouse and his deft finish left Atkinson sprawling as the ball nestled into the far corner of the net to send the away side into the ascendency. 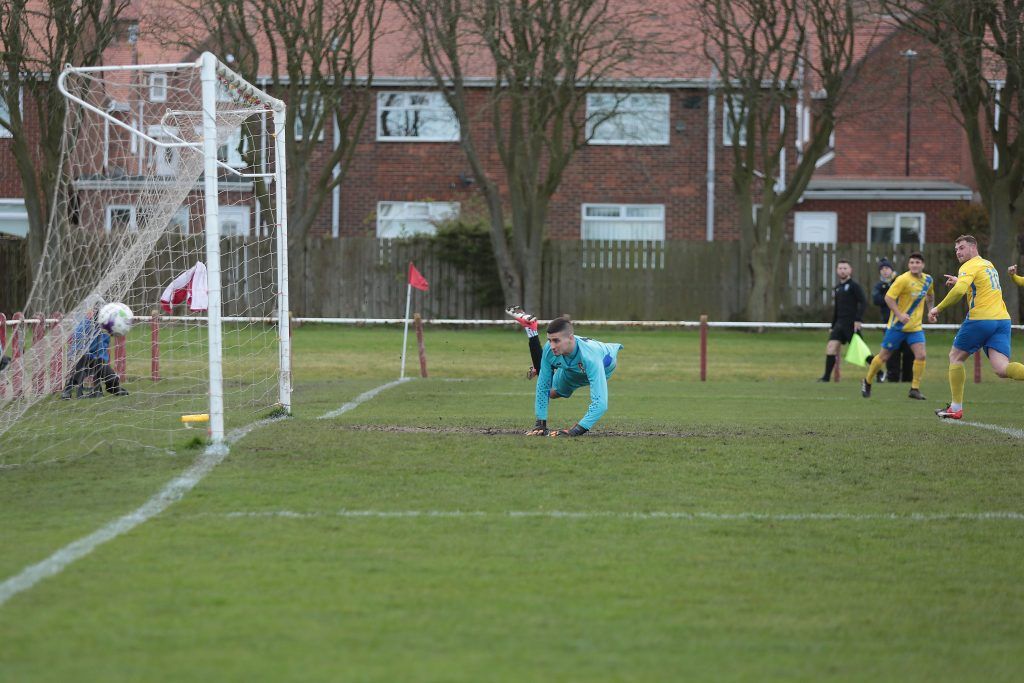 Despite some late first half pressure from the hosts, Woodhouse’s goal would send Stockton into the interval with the lead and staring down the barrel of a third consecutive win.

With the game so finely poised, the next goal was always going to be crucial and it was the men in yellow who looked most likely to seize it. They could have stretched their advantage on the hour mark when Adam Nicholson rose highest to meet Stockton’s free kick. He headed the ball down to Woodhouse but the forward was denied by an excellent save from Atkinson.

Three minutes later, the away side should have seen their lead doubled. Stockton advanced down the right and cut back onto his left foot before sending a teasing cross into the centre. The ball found the head of Sonni Coleman but the in-form forward could only send his effort the wrong side of the post. 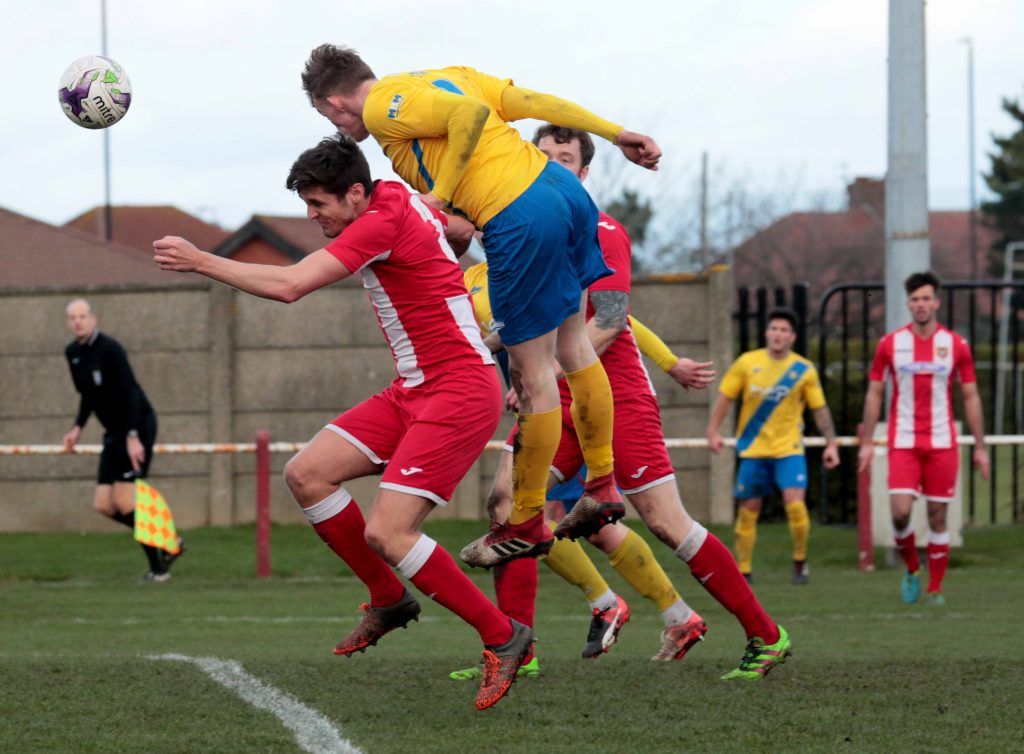 Sonni Coleman had a chance to stretch the lead.

Stockton should have been out of sight ten minutes from time when substitute Mikey Roberts demonstrated his pace as he broke clear with a quick fire counter attack. He surged through on goal before unselfishly squaring the ball to Bulmer. With only a defender to beat on the line, he looked certain to score but a remarkable block from Danni Lay kept the home side in the contest. 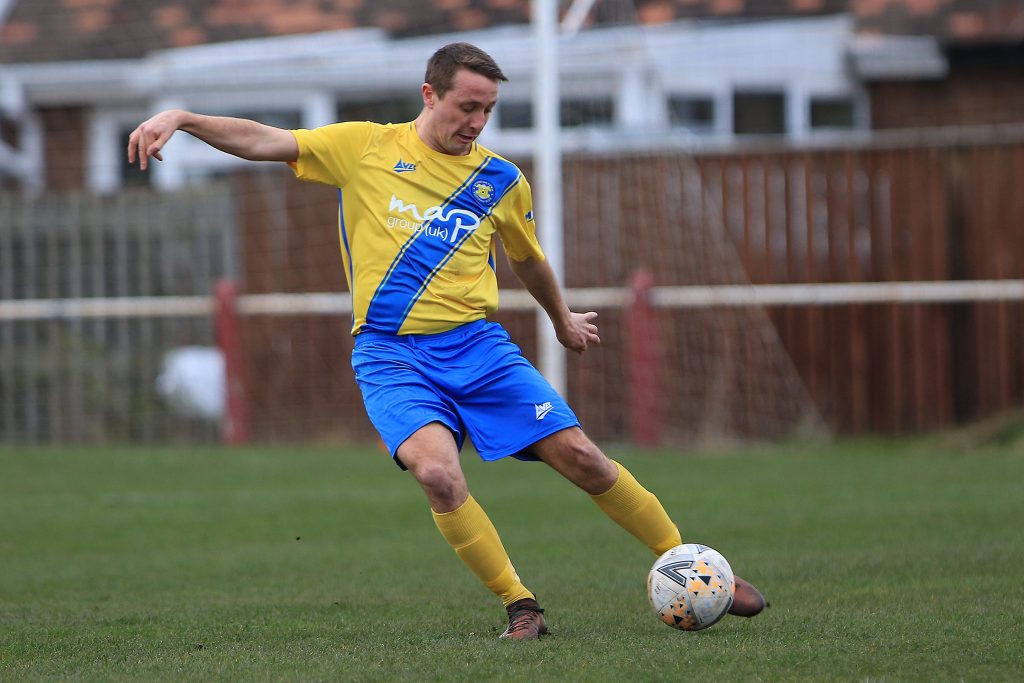 James Ward continued at left back for Stockton.

Just three minutes later and Stockton were ruing their missed opportunities. Jon Weirs picked up possession in the Stockton half and drove into the box before finding Devlin. The forward didn’t look to have connected cleanly but his strike had enough on it to beat Arthur and to draw his side level. 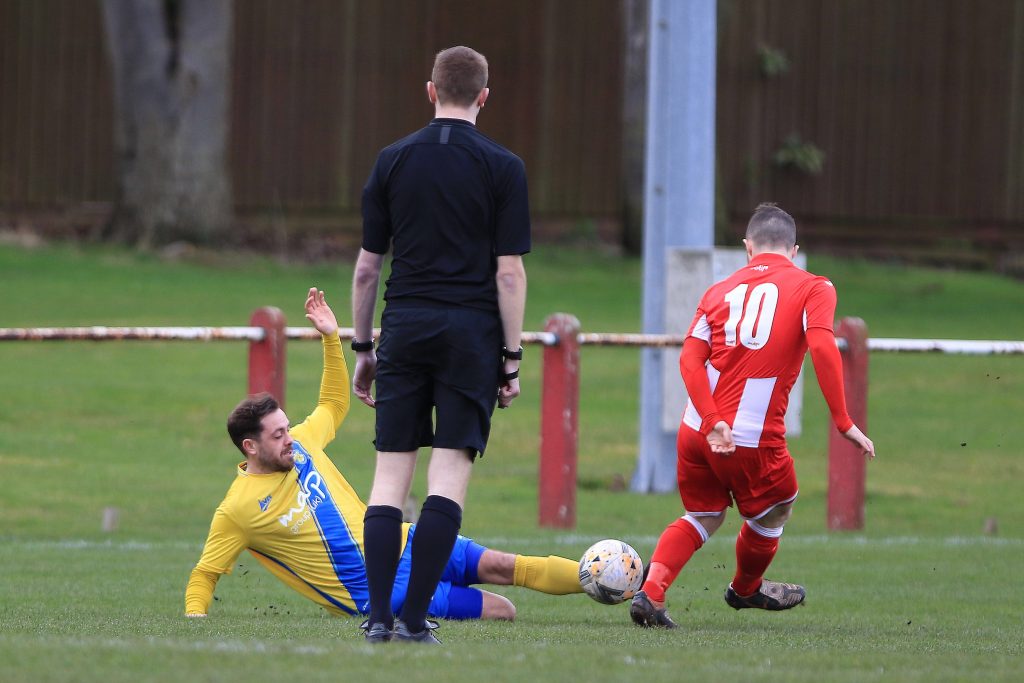 Nathan Mulligan’s appeals for a late penalty were turned away but it was another combative performance from him.

Stockton had two appeals for penalties turned down in the closing five minutes. Nathan Mulligan went down in the area under a challenge that was ruled fair before an even bigger shout was ruled out for what looked a certain handball in the last minute. Neither were deemed penalties and Michael Dunwell’s side were made to settle for one point on an afternoon when they might have felt they could have picked up three.