Stockton Town produced another encouraging performance to overcome a good Hebburn Town side and continue the current run of victories, this one made more special after having to play the last 50 minutes with 10 men.

James Risbrough returned to the starting line up in place of Chris Stockton, Josh Moody failed a fitness test so Michael Arthur took up the gloves once again. Tom Coulthard was on the bench after missing the last 7 games with injury as Stockton looked to avenge their defeat in the FA Vase at the hands of Hebburn a few weeks earlier.

The game started pretty quietly as both teams felt their way into it, Stockton looked the more likely and the first real effort on goal came on 7 mins when Shabs Mohammed latched onto a clearance from a corner and from 30 yards struck a sweet volley but straight at the keeper. The Anchors started to put some nice stuff together and their movement was starting to create space and opportunities. ‘Munchie” Risbrough linked up well with Fred Woodhouse on 11 minutes and as he got to the byline and pulled it back, Jack Donaghy just managed to get to the ball in front of Coleman sliding in at the far post and turn it out for a corner.

It looked like a goal was coming and despite all the nice football it came from Arthurs clearance up the field, Max Craggs flicked it on and RISBROUGH latched onto it, accelerated past the Hebburn defence and as Jennison came out to engage him he neatly slid it through his legs to give Stockton a deserved lead after 15 minutes. 1-0 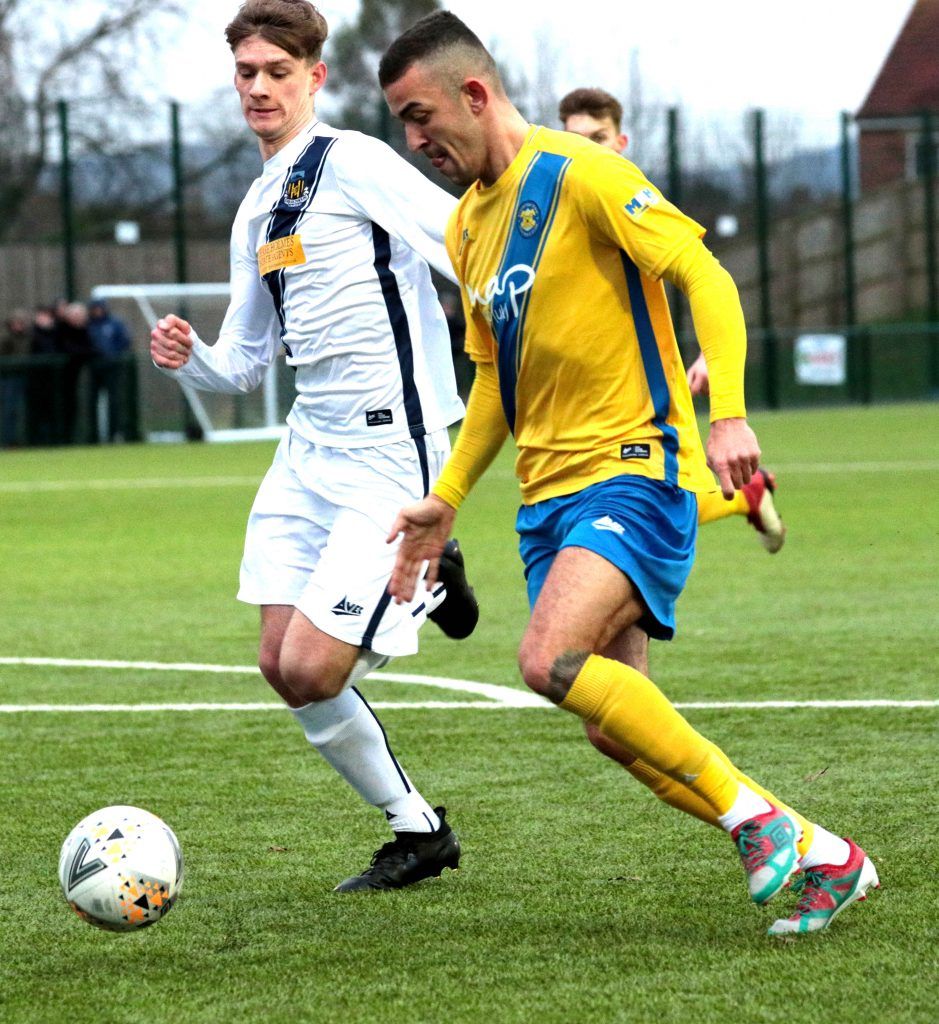 James Risbrough opens the scoring for the Anchors

The Anchors were now in the mood and just 5 minutes later they had a second and it was Risbrough reciprocating with an assist as he dropped inside and found space he curled a lovely weighted pass into the path of Max CRAGGS who provided an identical finish through the legs of Jennison to make it 2-0. 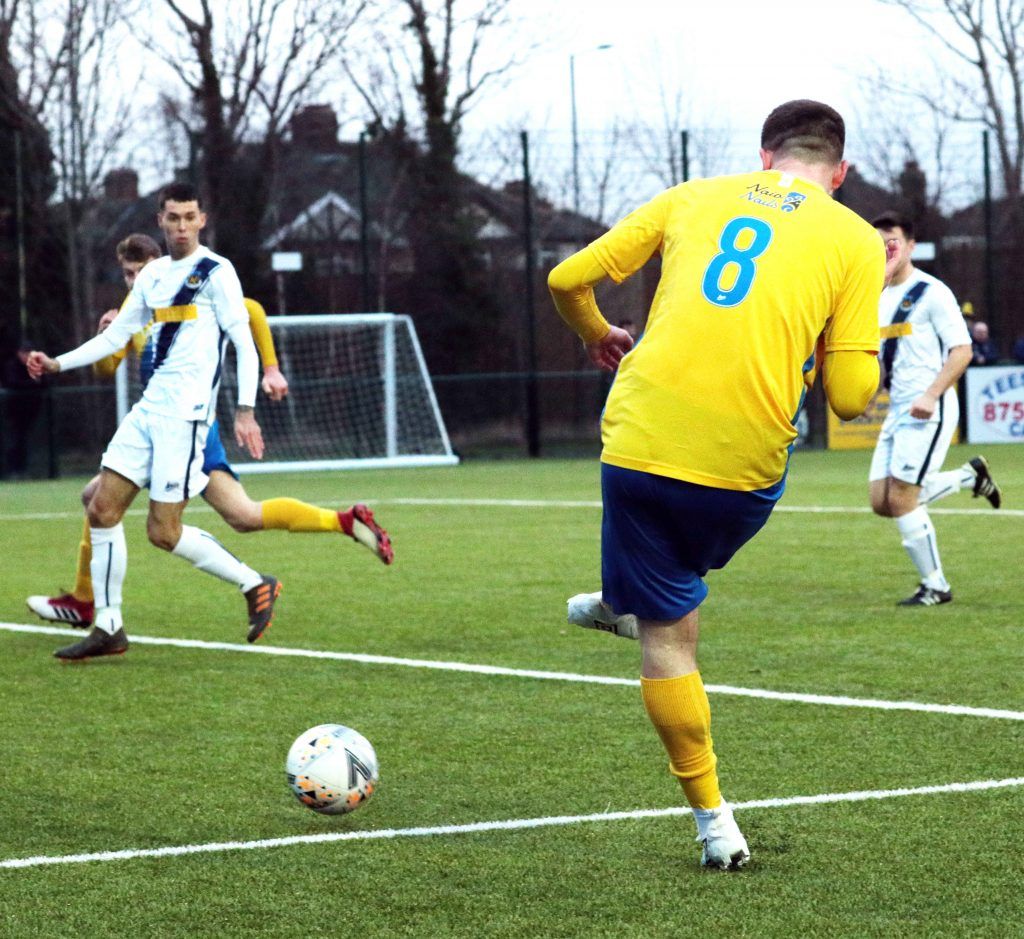 Hebburn were struggling to contain the Anchors now, their only real chance came when a mistake by Craggs gifted the ball to Chow who in space and unmarked couldn’t find the finish. A third goal would have been well deserved for Stockton but it didn’t come. Adam Nicholson moved forward into space tricked his way past two men and passed to Craggs who let fly from 25 yards just inches over the bar, then on 36 minutes Pete Bulmer linked up with Kev Hayes, Bulmer found Woodhouse bursting into the box again but he unfortunately miscued from 12 yards out. 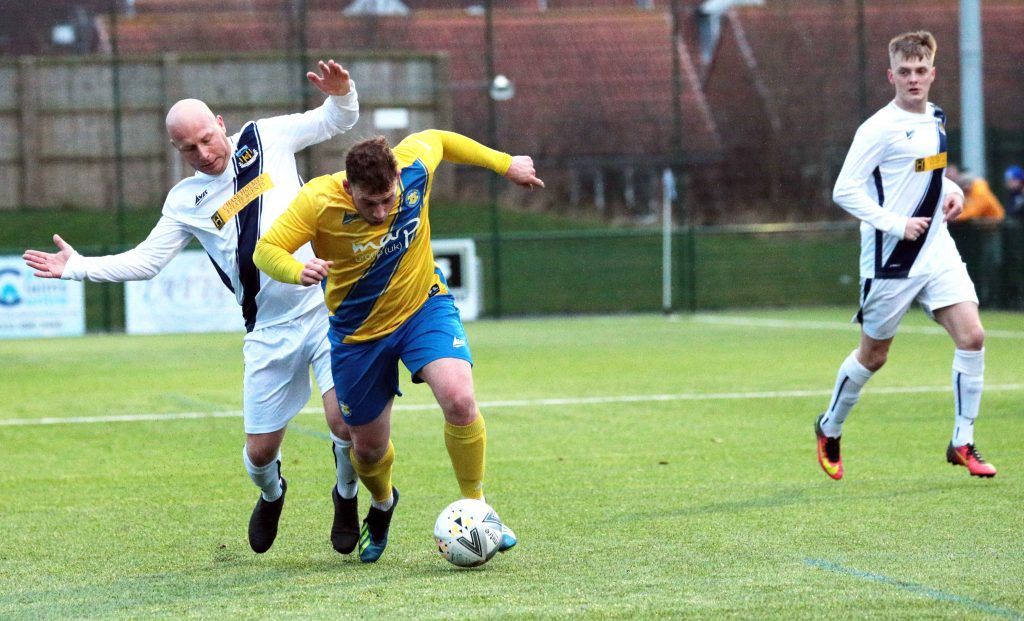 Fred Woodhouse was involved in everything until his dismissal

That was also unfortunately Woodhouse’s final action of the game as after being constantly fouled by his opposite number he literally saw ‘Red’ and a reckless high challenge saw him dismissed on 38 minutes. Half Time 2-0

The second half was always going to be a tough battle with only ten men against a very good side and Stockton had the worst possible start conceding after just 4 minutes. A Stockton corner was headed down by Nicholson and Colemans goal bound half volley was blocked and after a scramble it came to sub Stephenson who drilled a long raking ball which just evaded Bulmer and fell into the path of SHAW who ran through and finished easily past Arthur. Stephenson was then involved in a little controversy as he received a card for an elbow to the chest of Bulmer and then just 2 minutes later was penalised for deliberate handball, the automatic yellow that would surely even up the sides didn’t appear, just a talking to…Hmmm

Hebburn had a lot more of the ball second half obviously but the Anchors worked hard to cover trying to balance the pressing so as not to leave gaps and subs made at the right times gave that more impetus. Even with a man down the Anchors still created a couple of chances and Pete Bulmer slid to meet Risbroughs low cross and somehow from just a few yards out the contact sent the ball over the bar. Just 2 minutes later the missed chance looked even more crucial as Sub RICHARDSON cut in from the left and as players backed off him he arrowed an unstoppable right foot shot from 25 yards into the far top corner giving Arthur no chance and making it 2-2 . For the first time the crowd looked nervous as Stockton’s ten men would now have to see out 20 minutes against a resurgent Hebburn.

No need to panic though as 3 minutes later Tom Coulthards searching long ball forward fell in between Hebburn’s centre halves and goalkeeper and as they left it for one another Max CRAGGS was on hand to nip in and finish with a nice lob over Jennison to restore Stocktons advantage and for his fourth goal in the last two games.

That vital goal gave the team something to hang onto for the last period and the players responded with an amazing amount of effort and desire to get the job done. Hebburn went close to an equaliser in the final minute when the bar saved the Anchors as Sullivan sneaked in to make contact with a corner. The resulting shot from the rebound was blocked bravely by the excellent Jordan Robinson and the defence saw the game out including lots of nervy but exciting injury time. Full Time 3-2

Another excellent performance from ALL 14 players as the team seem to be growing in confidence by the week. Shabs Mohammed was excellent again in the holding role. Sonni Coleman ran his legs off, Nicholson and Robinson were imperious in defence once more especially in the final 15 minutes when crosses and long balls were pumped into the box. Munchie Risbrough showed again why he’s unstoppable when in the mood and Max Craggs is definitely back to his best and scoring goals. Couple of tough away games to come but if we continue to perform with this sort of intensity theres no reason to be fear anyone.